Is the High Unemployment Cyclical, Structural, or Both?

One of the remarkable features of the U.S. recession has been the dramatic collapse in demand. This collapse has yet to fully recover, but progress is being made as can be seen in the following figure. This figure shows the year-on-year growth rate of U.S. domestic demand (click on figure to enlarge): 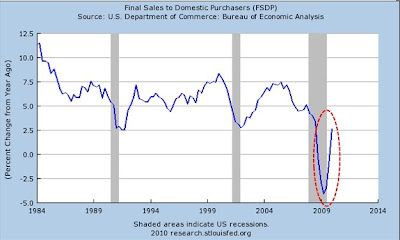 Given this modest recovery in demand one would think there would be a similar recovery in the labor market. But alas, unemployment remains stuck near 10% and the level of employment is where it was back in1999. Some observers are now wondering if more than demand is behind this lack of recovery in labor markets. Ryan Avent, for example, makes this point in a recent article in The Economist:

Were demand all that mattered, employment would be stronger. But its weakness, taken with the divergence of hiring and vacancies, suggests that other explanations are needed. It looks increasingly likely that America’s labour market has developed structural problems that may explain why it is struggling to respond.

Others making this argument include Tyler Cowen and Arnold Kling. Their bottom line is that in this current recession there is limit to what stabilizing demand--my preferred goal for monetary policy--can do for unemployment. In short, not all of the unemployment may be cyclical, some of it may also be structural. This point was further advanced a few days ago by Catherine Rampell in a New York Times piece. Among other things, Rampell brought up the fact that the rapid productivity gains occurring now imply more structural unemployment:

Pruning relatively less-efficient employees like clerks and travel agents, whose work can be done more cheaply by computers or workers abroad, makes American businesses more efficient. Year over year, productivity growth was at its highest level in over 50 years last quarter, pushing corporate profits to record highs and helping the economy grow...

Millions of workers who have already been unemployed for months, if not years, will most likely remain that way even as the overall job market continues to improve, economists say. The occupations they worked in, and the skills they currently possess, are never coming back in style. And the demand for new types of skills moves a lot more quickly than workers — especially older and less mobile workers — are able to retrain and gain those skills. 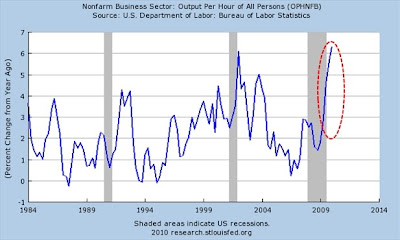 The acceleration of the labor productivity growth rate over the last few quarters is striking and consistent with Rampell's story. A more thorough measure, though, of productivity is total factor productivity (TFP) which the BLS only puts out on an annual basis. Fortunately, John Fernald of the San Francisco Fed has a paper where he constructs quarterly a TFP series as well as a utilization-adjusted (i.e. cyclically adjusted) quarterly TFP series. Unlike labor productivity which goes through 2010:Q1, the TFP data only goes through 2009:Q3. Still, an interesting picture emerges as seen in the figure below which graphs this data (click on figure to enlarge): 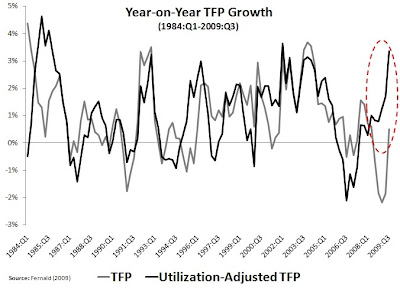 Overall TFP declined in the recession and has slightly recovered through 2009:Q3. It will be interesting to see if TFP recovers as rapidly as labor productivity in the subsequent quarters. My guess is that it will given the dramatic increase in utilization-adjusted TFP. Of course, this spike may be a one-time blip rather than a sustained increase. And unlike the productivity boom of 2001-2004, I don't know of any good stories for this spike in productivity. Still, it appears to be happening and this implies there may be more structural unemployment.

Given that there is structural unemployment, traditional unemployment benefits will not be a long-term solution. As Rampell notes,

There is no easy policy solution for helping the people left behind. The usual unemployment measures — like jobless benefits and food stamps — can serve as temporary palliatives, but they cannot make workers’ skills relevant again.

What can be done for these folks? Adam Ozimek proposes creating unemployment benefits that address structural unemployment:

So what policies could we pass to make the unemployed better off and incentive them in a way that speeds up the structural unemployment adjustment process? One idea is relocation vouchers. If you offer relocation vouchers to unemployed workers who move a minimum distance from their current residence, then you could incentivize labor to move where it is needed away from where it is no longer needed.

This is an interesting idea and Ozimek provides further discussion on how to finance it. Since the evidence seems to point to increased structural unemployment it is worth rethinking how we do unemployment benefits.

Update: John Fernald along with Susanto Basu and Miles Kimball have a 2006 AER article titled "Are Technology Improvements Contractionary?" Here is the abstract:

Yes. We construct a measure of aggregate technology change, controlling for aggregation effects, varying utilization of capital and labor, nonconstant returns, and imperfect competition. On impact, when technology improves, input use and nonresidential investment fall sharply. Output changes little. With a lag of several years, inputs and investment return to normal and output rises strongly. The standard one-sector real-business-cycle model is not consistent with this evidence. The evidence is consistent, however, with simple sticky-price models, which predict the results we find: when technology improves, inputs and investment generally fall in the short run, and output itself may also fall.

Technology here is analogous to TFP. This study, therefore, provides another reason to believe the rapid productivity gains of late may be creating structural unemployment.
Posted by David Beckworth at 11:37 AM