Is the Fed's Long-Run Inflation Target 2.5%? 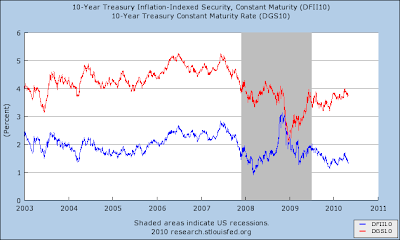 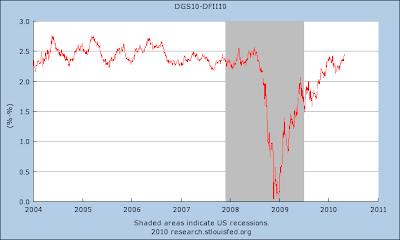 This caught my attention because if one goes and looks at the quarterly forecast for the average annual CPI inflation rate over the next 10 years in the Philadelphia Fed's Survey of Professional Forecasters the value is also around 2.5%. Here is the forecast data: 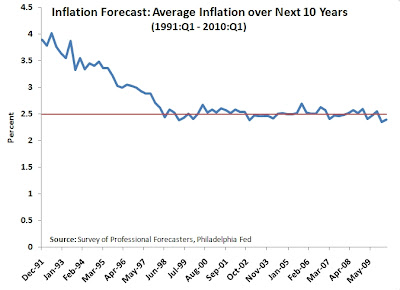 The similarity of inflation forecasts from the bond market and the survey is remarkable.* Even more remarkable is that this long-run value of 2.5% has persisted since the late 1990s and has not been seriously affected by the crisis. It suggests that this value is the Fed's long-run inflation target. As I have said before, the stability of this value attests to the Fed's inflation-fighting credibility. Bond markets, apparently, see no unanchoring of inflation in the future. Of course, this stability of the long-run inflation target also lends support to the view that the Fed was been too tight with monetary policy over the last year and half or so. And on the flip side such a rigid long-run inflation target may also present problems when there are sustained productivity gains.

*Yes, there is a big difference between the two series during the financial crisis, but much of that may be due to the sharp rise in the liquidity premium on TIPS during this time. Also, the bond market data is daily while the survey is quarterly so some of the day-to-day variation is lost in averaging for the survey.

Posted by David Beckworth at 2:02 PM