The topic du jour in many parts of the economics blogosphere is whether there will be a double-dip recession in the second half of 2010. Some folks like MacroAdvisors see absolutely no chance of a recession while others like David Rosenberg see a 80% probability of another recession. Other observers like Yves Smith, meanwhile, question whether there has even been a real recovery at all. One bit of information that is stoking the coals of this debate is the ECRI's weekly leading economic indicator series. Supposedly this is one of the better leading indicator series and as a result some folks have taken notice of the recent 5-week decline in the series as evidence there is a real chance of a double-dip recession. This series is graphed below (click on figure to enlarge): 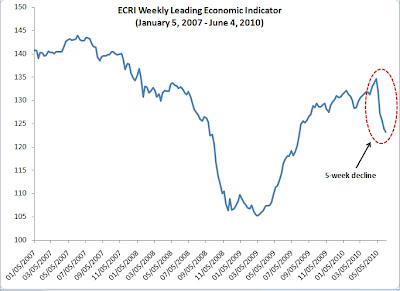 I thought it would be interesting to use this series to help forecast real GDP over the second half of this year. To make this forecast I first converted the weekly series into a monthly one and plugged it into a vector autoregression (VAR) model that also had the monthly real GDP series from MacroAdvisors (yes, the same ones who see no recession later this year). Using 6 lags of data, I estimated this simple two-variable VAR and forecasted monthly real GDP for the months of May, 2010 through December, 2010. The forecast starts in May since the current real GDP data only goes through the month of April.

So what does this precipitous decline in the ECRI leading indicator mean for real GDP going forward? Here is how the VAR answers the question: 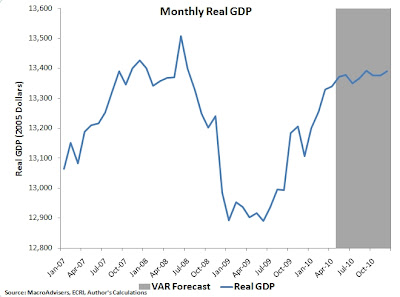 Real GDP will slow down to about 0% growth according to this simple model. This forecast is consistent with many observers--including ECRI as seen this video--who see a growth slowdown the second half, but not an outright contraction of the economy. I would note, though, that this type of analysis should only serve as a baseline forecast. Other developments such as a worsening of the Eurozone crisis or premature tightening of economic policy could further undermine U.S. economic growth.
Posted by David Beckworth at 10:30 AM