When I first moved to Texas I was surprised at the intensity of Texan pride. I now think some of it is justified given how well the Texan economy has handled the recession. Texas was one of the last states to start shedding jobs--employment peaked in August 2008--and started adding jobs way back in October 2009 as illustrated in the figure below: 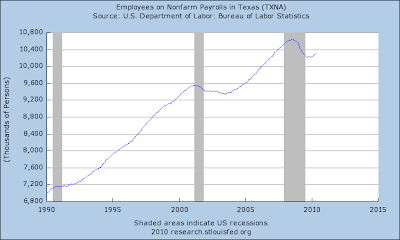 Now compare these developments in Texas to the employment carnage in my previous home state, Michigan: 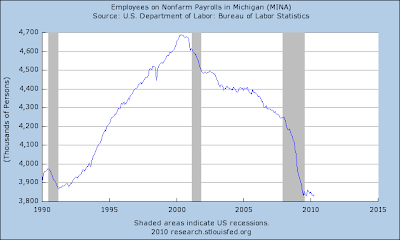 What a night and day difference. Michigan has had a decade of job destruction. Micheal D. Lafaive argues these developments are due to differences in economic freedom between the two states. Maybe so, but I suspect the lack of industry diversification in Michigan compared to that in Texas plays an important role. One point Lafaive does get right is that Michigan's gift to Texas is people. I am evidence of that. I left Michigan in 2007 and have never looked back.* Apparently a net total of 68,000 Michiganders did the same thing as me between 2000 and 2008. If only the Eurozone had such labor mobility.**
*To be clear, though, I am not a true Michigander like fellow economics blogger Josh Hendrickson. Therefore, leaving Michigan was not hard for me.
**If the Eurozone did have such labor mobility, which country would be Michigan (Greece?) and which one would be Texas (???)?

Update: The Dallas Fed takes thinks it sees a recovery under way in Texas.

Update II: I inadvertently put up financial sector employment in the original post for Michigan. It is now corrected to reflect total non-farm payroll employment.
Posted by David Beckworth at 4:45 PM