Inflation Expectations Are Not Stable!

Many observers, including myself, have been puzzled by the Fed's lack of urgency in recent months over the apparent slowing down of aggregate demand.  The one thing monetary policy is capable of doing is stabilizing total current dollar spending, but it isn't and this inaction effectively amounts to a tightening of monetary policy.  There have been many reasons given for this seeming complacency by the Fed: internal divisions over policy, fear of political backlash, opportunistic disinflation, fear of awakening bond vigilettentes, and sheer exhaustion.  Another potential reason is that the Fed simply doesn't see this aggregate demand slowdown in the data.  I actually considered this possibility some time ago but never put too much weight on it since this is the Federal Reserve after all.  It has far more resources than I do and  surely sees what I see in the data. However, after Fed Chairman Ben Bernanke's speech yesterday I am beginning to wonder if the Fed is actually missing something in the data.  In particular, I was stunned to read this sentence in the speech: 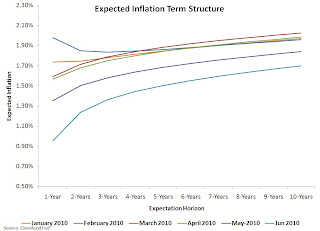 Now to put this figure into perspective let's look at the term structure of inflation expectations the last time expected inflation fell rapidly and caused aggregate demand to tank.  Yes, that would be the late 2008, early 2009 period.  Here is the figure for this time.  Notice any similarities? (Click on figure to enlarge.) 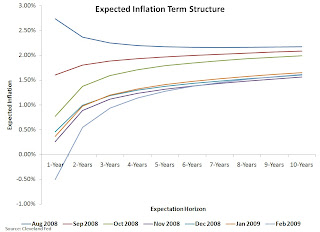 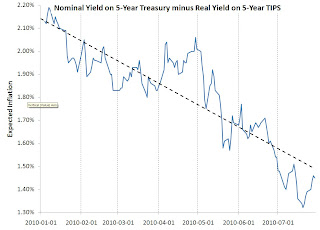 Here again there is a clear downward trend. Inflation expectations are falling and there is currently no end in sight.  Given all of this evidence, how can Ben Bernanke assert that inflationary expectations are stable?  I am truly bewildered by that claim. I hope Fed officials who have read this far are also bewildered and are now reconsidering their views.  Let me be very clear what all of this implies: by failing to stabilize inflation expectations the Fed is effectively tightening monetary policy at a most inopportune time. I hope this is not how the Fed wants to be remembered.
Posted by David Beckworth at 11:06 PM