Jeremy Siegel Gets It

Jeremy Siegel is making the case the case that rising yields indicate the Fed's policy is actually working:

Long-term Treasury rates are influenced positively by economic growth—which encourages consumers to borrow in anticipation of higher incomes and causes firms to seek funds to expand capacity—and by inflationary expectations. Long-term Treasury rates are affected negatively by risk aversion: Seeking a safe haven, investors pile into Treasury bonds, running up their prices and lowering their yields.
The Fed's QE2 program has raised expectations of growth and inflation, sending long-term Treasury rates up. It has also lowered risk aversion, which implies rising long-term rates. The evidence for a decline in risk aversion among investors is the shrinkage in the spreads between Treasury and other fixed-income securities, the strong performance of the stock market, and the decline in VIX, the indicator of future stock-market volatility. This means that expectations of accelerating economic growth—and a reduction in the fear of a double-dip recession—are the driving forces behind the rise in rates.

More and more observers are picking up on this notion that rising yields may be reflecting an improving economic outlook. As I have noted before, this is a welcome reprieve from the common but wrong view that QE2's success is dependent on the Fed maintaining low long-term interest rates.  The correct story goes something like this: higher expected inflation from QE2 should increase expected nominal spending and in turn raise expected real economic growth (given sticky prices and excess capacity).
Here is the latest figure on the 10-year expected inflation (red line) and the 10-year real yield (blue line) from the TIPs market. It continues to show an upward march for real yields. 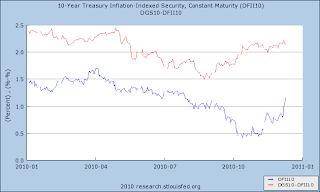