More folks are now considering the possibility that the rise in long-term interest rates may be a sign of economic recovery.  For example, see Ryan Avent, Paul Krugman, Cardiff Garcia, and David Andolfotto.  This is a welcome reprieve from the those observers who point to the rising yields as a sign that QE2 is failing.
Recall that the recovery view begins with notion that a successful QE2 will first raise inflation expectations.    The increase in  inflation expectations, however, also implies higher expected nominal spending (i.e. higher future nominal spending means higher future inflation).  Higher expected nominal spending in an economy with sticky prices and excess capacity should in turn lead to increases in expected real economic growth.  Finally, this higher expected real economic growth should increase current real long-term yields.  Given the fisher equation, this understanding implies that the rising long-term nominal yields are occurring because of both higher expected inflation and higher real yields.
Though it too soon to know for sure,  the data seem to support the recovery interpretation of the rising nominal yields.  Below is a figure showing the 10-year expected inflation rate and the 10-year real interest rate from the TIPs market.  This figure shows that inflation expectations pick up first and eventually the real interest rate does too: (Click on figure to enlarge.) 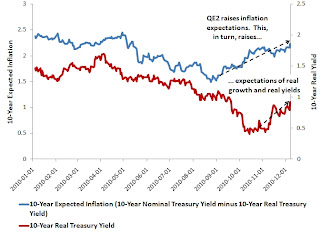 If this understanding  is correct, then QE2 seems to be doing some good.

Update:  Ryan Avent is now fully on board with the recovery view of rising yields:


BUTTONWOOD continues to be sceptical of the Fed's new security purchases. And, you won't be surprised to hear, I continue to think his fears are somewhat misplaced. He writes, for instance:


It is possible that the Fed's actions have actually been counter-productive, since 10-year bond yields are actually higher than they were when the second round of QE was announced. In part, this may be a case of "buy on the rumour, sell on the news". But the 30 basis point rise in bond yields over the last two days has revealed signs of investor cynicism.

Reduced bond yields are not the Fed's goal. The Fed's goal is to facilitate recovery, so as to move inflation and unemployment closer to the central bank's target levels. Beginning in late August, the Fed signalled its intent to do more to achieve its goal through additional purchases of Treasury securities. And indeed, the Fed's messaging was successful; Treasury yields were lower in early October than they were in late August. But lower yields were the means, not the end. The promise of more Fed action boosted markets and expectations, and before long actual economic data was following suit. But of course, we'd expect an improving outlook for the American economy to lift American government bond yields. Yields were low, aside from Fed activity, because investors were uninterested in putting their money in private projects. That's no longer the case; with rising growth expectations comes rising interest in private investment, which makes for falling bond prices and rising yields. Yields are rising because QE2 has been successful.

Posted by David Beckworth at 4:08 PM