Paul Krugman has a post explaining the monetary policy transmission channels for QE2. His explanation is that there was a rise in wealth effect-driven consumption spending via the rising stock market and a rise in foreign spending on the U.S. economy via the depreciated dollar.  While true, there is a far richer story to tell with the portfolio rebalancing channel of monetary policy. Here is how I described it before:

Currently, short-term Treasury debt like T-bills are near-perfect substitutes for bank reserves because both earn close to zero percent and have similar liquidity.  In order for the Fed to get investors to spend some of their money holdings it must first cause a meaningful change in their portfolio of assets.  Swapping T-bills for bank reserves will not do it because they are practically the same now. In order to get traction, the Fed needs to swap assets that are not perfect substitutes.  In this case, the Fed has decided to buy less-liquid, higher-yielding, longer-term Treasury securities.  Doing so should lower the average maturity of publicly-held U.S. debt.  It should also overweight investor's portfolios with highly-liquid, lower-yielding assets and force investors to rebalance them.  In order to rebalance their portofolios, investors would start buying higher-yielding assets like stocks and capital.  This would ultimately drive up consumption spending--through the wealth effect--and investment spending.  The portfolio rebalancing, then, ultimately cause an increase in nominal spending.  Given the excess economic capacity, this rise in nominal spending should in turn raise real economic activity.

Note that the rise in stock prices and the drop in the dollar's value all  occur as result of the portfolio rebalancing above.  This description so far, however, is incomplete because it ignores the effect of expectations on the portfolio adjustment channel:

If the Fed could convince investors that it is committed to the objective of higher nominal spending and higher inflation... then much of the rebalancing could occur without the Fed actually buying the securities.  For if investors believe there will be a Fed-induced rise in nominal spending that will lead to higher real economic growth and thus higher real returns, they will on their own accord start  rebalancing their portfolios toward higher yielding assets. Likewise, if investors anticipate higher inflation, then the expected return to holding money assets declines and causes them to rebalance their portfolios toward higher yielding assets.  In other words, by properly shaping nominal expectations the Fed could get the market to do most of the heavy lifting itself.

What is remarkable is that QE2 has done as much as it has given that (1) the U.S. Treasury has been undermining QE2 by increasing the average maturity of the U.S. debt and (2) QE2 being implemented in a less than optimal fashion.  It must be that QE2's ability to rebalance portfolios and improve the economy has come largely from its changing of  expectations as outlined above.

Update I: Here is a figure showing how QE2 has changed expected nominal spending growth: 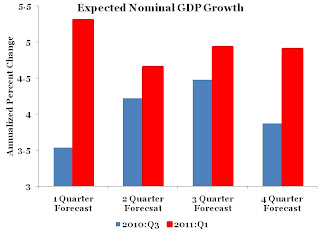 Source: Philadelphia Fed's Survey of Professional Forecasters
While there is a marked improvement, the need for catch-up growth to return  nominal spending to its trend means the rise in expected nominal spending growth is far from adequate.


Update II:  Marcus Nunes shows that Fed policy (including QE2) over the past few years  has been constrained by the "memory-less" nature of inflation targeting.
Posted by David Beckworth at 9:56 AM