I will let the data answer the question.  To do that, I took the Cleveland Fed's monthly 10-year expected inflation rate series and plotted it against the subsequent growth in nominal consumer expenditures.  I looked at a one, two, and three-year horizons for subsequent consumer spending growth.  Below are the scatterplots created from this exercise. (The data starts in 1982:1 since that is the beginning of the Cleveland Fed's expected inflation series.) 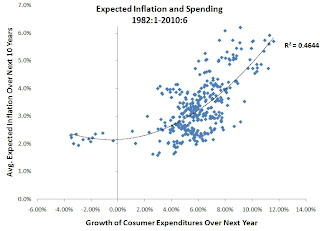 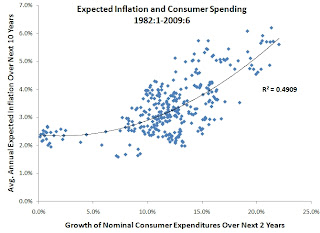 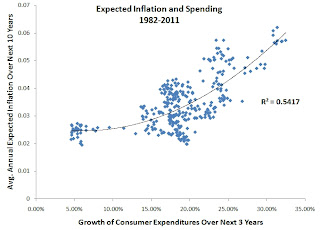 Not only is there a strong relationship, but it gets stronger at longer horizons for consumer expenditures.  So changes in expected inflation do affect nominal spending.  This is nothing new and is a central tenet of modern macroeconomics.  I only bring it up now because some observers have questioned whether there really is this relationship.  Reviewing this relationship also reminds us why it is important for the Fed to be clearer about the future path of monetary policy.

Update: I used expected inflation above because that has been the focus of recent debates. As an advocate of nominal GDP targeting, I believe a better perspective is to look at nominal spending expectations.  To do that, I  went to the Survey of Professional Forecasters and took the average annualized quarterly growth rate forecasted for nominal GDP over the next year and compared it to the actual growth of nominal GDP over the next year. Here is the figure: 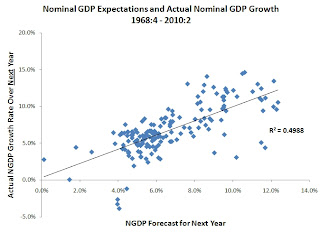 Once again, expectations matter.
Posted by David Beckworth at 2:16 PM