Getting Serious About the Tight Money Problem

Ramesh Ponnuru says monetary policy is not loose, but tight:


The Federal Reserve is now the subject of more political controversy than at any point since the beginning of the 1980s.  The debate centers on what the Washington Post calls its “ultra-easy” monetary policy: Is it hurting or helping the economy? Has the Fed already loosened so much that it has used up its ability to stimulate the economy?

It’s a heated debate, but its premise happens to be wrong. We don’t have loose money, and we haven’t during our entire economic slump. A big reason that slump has been so deep and long is that the Fed is keeping money tight: It’s not letting the money supply increase enough to keep current-dollar spending growing at its historical rate. 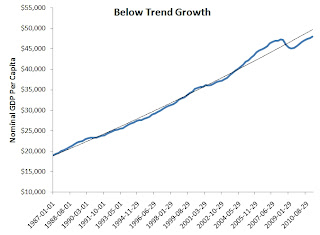 Bruce Bartlett makes a similar point.  He says that though the Fed has made some effort, it has not gone nearly far enough to offset the sustained decline in velocity:


[T]he Federal Reserve could have offset the decline in spending and velocity resulting from the fall in home prices with a sufficient increase in the money supply. And it tried. Since 2006, money supply has increased by about $2 trillion. But velocity fell faster than the money supply increased as households reduced spending and increased saving — the saving rate is now over 5 percent — and banks and businesses hoarded cash.

The key, then, is to undo this largely passive tightening of monetary policy.  Here is how I would do it.
Posted by David Beckworth at 2:13 PM