Bernanke: "Read My Lips, Not My Japan Papers!"

Fed Chairman Ben Bernanke was asked yesterday in the post-FOMC press conference  whether the Fed's response to the current economic crisis is consistent with his views as an academic.  The context for this question was Paul Krugman's recent article where he noted that Bernanke was not following his own advice in the late 1990s where he argued that Japanese monetary authorities should be doing more to restore aggregate demand.  Here is how Bernanke answered the question:

So there’s this view circulating that the views I expressed about 15 years ago on the Bank of Japan are somehow inconsistent with our current policies. That is absolutely incorrect. My views and our policies today are completely consistent with the views that I held at that time.

I made two points at that time to the Bank of Japan. The first was that I believe that a determined central bank could and should work to eliminate deflation, that is, falling prices. The second point that I made was that when short-term interest rates hit zero, the tools of a central bank are no longer — are not exhausted. There are still other things that — that the central bank can do to create additional accommodation.

Now, looking at the current situation in the United States, we are not in deflation... So the — the very critical difference between the Japanese situation 15 years ago and the U.S. situation today is that Japan was in deflation.

So Bernanke responds that he is being consistent because in Japan there was deflation whereas currently there is none. But as Ryan Avent notes, his research on Japan was about more than deflation--it was about a shortage of aggregate demand. This point can be easily seen by looking at his 1999 paper where he discusses Japan's economic problems.  The first section after the introduction reads as follows:

Before discussing ways in which Japanese monetary policy could become more expansionary, I will briefly discuss the evidence for the view that a more expansionary monetary policy is needed.  As already  suggested, I do not deny that important structural problems, in the financial system and elsewhere, are helping to constrain Japanese growth.  But I also believe that there is compelling evidence that the Japanese economy is also suffering today from an aggregate demand deficiency.  If monetary policy could deliver increased nominal spending, some of the difficult structural problems that Japan faces would no longer seem so difficult.

If the section header is not obvious enough, the first paragraph makes clear that Bernanke believed there was a serious "aggregate demand deficiency" problem in Japan.  Deflation is nowhere in that lead paragraph.  It only appears later as one of several indicators of the AD deficiency.  Bernanke even mentions in the paper that  using deflation as indicator of weak AD can be problematic:

Perhaps more salient, it must be admitted that there have been many periods (for example, under the classical gold standard or the price-level-targeting regime of interwar Sweden) in which zero inflation or slight deflation coexisted with reasonable prosperity.

Deflation is tricky because it can be caused by both a negative aggregate demand shock or a positive aggregate supply shock.  In other words, deflation is only a symptom of the underlying problem Bernanke is concerned about.  And, as Bernanke reports, outright deflation occurred only a few years in the 1990s, with most of the deflation instances falling just shy of 0%. In other words, the1990s Japan was not a decade of sharp deflation.  This decade actually had a slightly positive rate of inflation on average:


That is why Bernanke turns to other indicators in his paper to support his story of AD deficiency.  For example, here he turns to direct measures of AD to make the case:

In short, Bernanke's interest in the troubled Japanese economy was not motivated by deflation concerns, but by AD deficiency concerns.  And by this criteria, the Bernanke Fed is not following Bernanke's monetary policy prescriptions for Japanese monetary authorities.  This can be seen in the table above that shows average NGDP growth in the United States since 2008 is similar to the low average NGDP growth rate in Japan over the time period covered in Bernanke's paper.  Moreover, the deviation of U.S. NGDP growth from its expected path in 2011 is not too different from the deviation of  Japanese NGDP growth from its expected path in the late1990s. 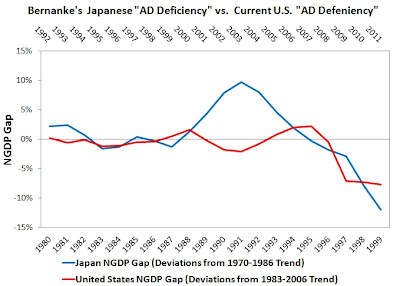 
In other words, Bernanke's Japanese AD deficiency problem in 1999 is very similar to the current U.S. AD deficiency problem.  And contrary to the claims of some Fed officials, this current AD deficiency could be addressed without risking the Fed inflation-fighting credibility by adopting a price level or NGDP level target. Sigh.

P.S. A big thanks to Binyamin Applebaum of the New York Times for asking Bernanke the question.
Posted by David Beckworth at 3:53 PM