What is the theoretical underpinning for NGDP targeting? And what is the empirical evidence that leads them to believe that an NGDP target right now is a cure for whatever ails us right now?

He wants to know why proponents of NGDP level targeting are so confident that it would help the sluggish economy. Nick Rowe, Scott Sumner, David Glasner, Bill Woolsey, Mark Thoma, and Jason Raves replied to Andolfatto's first question by providing theoretical justifications for being confident.  Here I want to focus on his second question, but before doing that let me quickly note two important creditor-debtor problems that a NGDP level target would overcome in the current crisis.

The first problem is restoring the expected relationship between creditors and debtors that prevailed prior to the economic crisis.  This is the 'risk sharing' problem recognized by David Andolfatto that a price level or strict inflation target cannot address.   A NGDP level target would solve this problem by restoring nominal incomes to their expected pre-crisis paths when debtors signed their nominal debt contracts.    It is possible for nominal debt contracts to be renegotiated, but as Steve Randy Waldman notes this is very difficult in practice.

The second problem is that there is a massive coordination failure among creditors now.  Creditors could increase their spending to offset the debtor's drop in spending as the latter deleverages.  The reason creditors have not--non-bank creditors are 'sitting' on money assets while bank creditors are destroying them as they are acquired from the deleveraging debtors--is because they are uncertain about future economic activity. These actions by creditors create an excess demand for money or, equivalently, a shortage of safe assets. Now imagine that something simultaneously catalyzed creditors' expectations such that it got them to start using and creating money assets again. The excess money demand problem would disappear and there would be a recovery.  Enter a NGDP level target and its ability to shape expectations.  If credible, this target would raise expected aggregate nominal spending and, in turn, raise expected aggregate nominal income.  It would also probably lead to a temporary surge in inflation.  All would reduce excess money demand by creditors and spark a nominal spending recovery.

Okay, so what is the empirical evidence that a higher level of NGDP would make a difference now?   The most obvious answer is that those advanced economies currently doing the best are the ones where aggregate nominal spending has remained on or near its pre-crisis trend.  Case in point is Germany.  Its NGDP has remained very close to its pre-crisis trend and consequently, its economy is doing relatively well.  The German unemployment rate has actually fallen since the crisis and consumer confidence is holding up (though slightly down in recent months).  The rest of the Eurozone has not remained close to its pre-crisis trend and we all know how well things are going there.  From this perspective, the Eurozone crisis is nothing more than a NGDP crisis.  (Yes, the Eurozone is a structurally flawed currency union and some countries like Greece are serially defaulters, but Spain and  France? This figure says it all.)

The table below shows the NGDP gap (% deviation from pre-crisis trend) and the unemployment rate for a number of advanced economies.  The data comes from Fred and where possible harmonized unemployment rates are used.  Look closely and you should see a relationship between the two series. 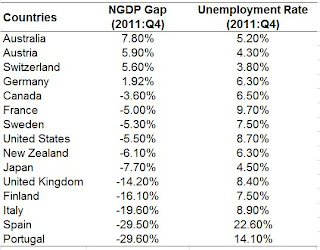 In case the relationship is not clear, here are the two series placed in a scatterplot.  The figure shows that those countries with NGDP closer to their pre-crisis trend typically have lower unemployment rates. 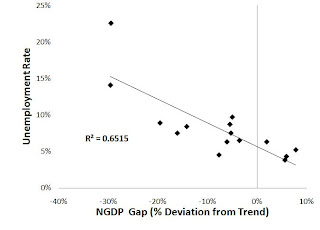 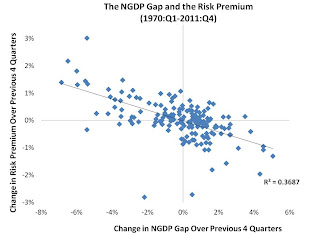 A final but important piece of evidence is FDR's very own QE program in 1933.  He had publicly called for the price level to return to its pre-crisis trend and then backed up the rhetoric with a devaluation of the dollar (relative to gold).  As Gautti Eggertson shows, this policy dramatically altered expectations and sparked a robust recovery in 1933.  This implicit price level target of FDRs was  no different than a NGDP level target in this case.  It required radically altering expectations and then being willing to act upon it.  A NGDP level target would do the same today.  It would commit the Fed to buying up as many assets as needed to restore aggregate nominal spending to some pre-crisis trend.  Just the expectation of the Fed doing that may itself cause the market to do much of the heavy lifting.  Portfolios would automatically adjust from lower-yielding safe assets to higher-yielding riskier assets. This portfolio adjustment by itself would raise asset prices and reinforce the recovery.


And what is the downside?  What if adopting a NGDP level target does not improve the economy?  The upshot here is that with a level target there is still a strong nominal anchor in place.  The NGDP level target allows rapid catch-up growth (or contraction) in nominal spending without causing long-run inflation expectations to become unmoored.  Thus, there is far less risk in trying NGDP level targeting than many observers assume.

Posted by David Beckworth at 3:18 PM