A Dereliction of Duty

Market Monetarists have long made the case that a nominal GDP (NGDP) level target would firmly anchor the expected growth path of nominal income.  Doing so, in turn, would stabilize current nominal spending since households and firms are forward looking in their decision making.  For example, holding wealth constant, households generally will put off purchasing a new car or renovating their homes if they expect their nominal incomes to fall and vice versa.  This is why Scott Sumner likes to say monetary policy works with long and variable leads. This understanding implies, therefore, that the reason for nominal spending remaining below is its pre-crisis trend is that the Fed has failed to restore expected nominal income to its pre-crisis path. This failure amounts to a passive tightening of  monetary policy.

In the past I provided some supporting evidence for this view using data from the Survey of Professional Forecasters.  Thanks to Evan Soltas, we now know of an another measure of expected nominal income growth that provides further evidence for the Market Monetarist view. The data comes from a question on the Thompson Reuters/University of Michigan Surveys of Consumer where households are asked how mcuh their nominal family income is expected to change over the next 12 months.  The figure below shows this measure up through October, 2011. 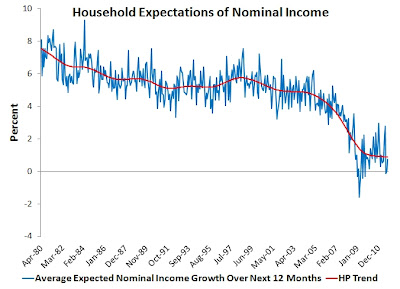 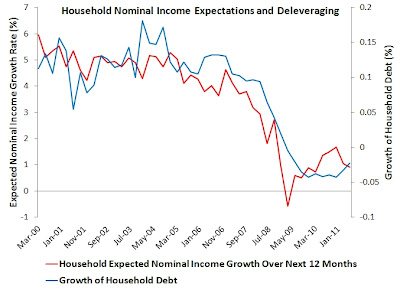 A recent study that makes use of this data has findings that reinforce the importance of stabilizing nominal income expectations.  Mariacristina De Nardi, Eric French, and David Benson of the Chicago Fed in paper titled "Consumption and the Great Recession" examine the importance of changes in expected nominal income and wealth for aggregate consumption. Among other things, they find that expected nominal income growth deteriorates across all age groups, educational levels, and income levels over the past few years.  This is not some sectoral-specific (i.e. structural) development.  They also find that the collapse in expected nominal income growth was an important determinant of the fall in aggregate consumption during the Great Recession.

P.S. Maybe the Chicago Fed study had some influence in converting Chicago Fed President Charles Evans to a fan of NGDP level targeting.
Posted by David Beckworth at 5:46 PM