Some parting thoughts for the weekend.

1.   Chris Hayes nails it in this interview on the implications of Senator David Vitter blocking President Obama's Fed nominees.  He correctly notes that Senator Vitter's actions are preventing a robust recovery in aggregate nominal spending.  This, of course, worsens President's Obama's chances of getting relected which is politically smart for Senator Vitter.  But it is also prolonging the human suffering caused by the ongoing economic slump. Here is Chris Hayes:

What Senator Vitter and other hard-money advocates fail to realize is that the Fed has effectively kept monetary policy tight. They also fail to realize there is a rule-based remedy to this problem called NGDP level targeting. It would minimize the Fed's "activism" that bothers the senator so much, but still spur a recovery in aggregate nominal spending.

Senator Vitter should also note that by preventing the Fed from doing more, he is effectively creating a larger cyclical budget deficit and opening the door for more government intervention. Conservatives do not realize it, but they need more (systematic) monetary policy if they want less government involvement in the economy.  For more on this point see my article with Ramesh Ponnuru in The New Republic or my QE2 article in the National Review.   (hat tip Mike Konczal)

2. Scott Sumner recently had the following to say in a recent post:


I don’t think Keynesians should be arguing that lower real interest rates are the key to recovery.  A bold and credible monetary stimulus that was expected to produce much faster NGDP growth might well raise long term risk-free interest rates.

This elicited a response from Tim Duy and Bill Woosley who both agreed that interest rates would ultimately go up if the Fed were doing a better job.  That is, a more aggressive monetary stimulus program by the Fed should raise expected economic growth and, in turn, raise the demand for credit.  These developments would then raise interest rates.  Duy and Woolsey explain this thinking using a modified IS-LM model, something that Paul Krugman and I have has done in the past too.

Here is Scott's argument is a graph. 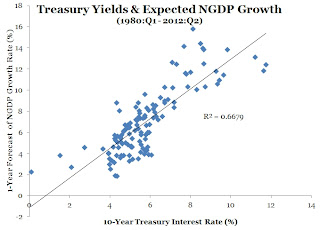 3.  Izabella Kaminsky and Cardiff Garcia have been doing a great job at FTAlphaville following the safe assets shortage issue.  For example, see here and here.   I have been meaning to do a full post response for them.  For now I want to note the following. It is how I view the safe asset problem in light of NGDP level targeting:

Gorton, Lewellen, and Metrick (2012) show that safe assets have constituted a relative stable share of all assets since the 1950s. They also show, as does Bansal, Coleman, and Lundblad (2011), that public and private safe assets tend to act as substitutes in providing liquidity services.  Given these findings, it stands to reason that when the central bank is doing its job and nominal GDP (NGDP) is growing at its appropriate trend, then there will be enough safe assets being privately provided.  If, however, the central bank slips and NGDP falls below its expected path, then some of the privately produced safe assets disappear, creating a shortage of safe assets. The government steps in and creates safe assets that, if produced sufficiently, would restore NGDP back to its expected path. In other words, if monetary policy does not do its job then fiscal policy could substitute for it, but in a way not normally imagined. It would do so not by increasing aggregate demand via higher government spending, but by making up for the shortage of safe assets that facilitate transactions.  All this requires is running a budget deficit which may or may not imply higher government spending (i.e. it could also come from tax cuts).  Debates about Ricardian equivalence, crowding out, and other fiscal policy concerns become moot.  What matters is if there are enough safe assets, and if not, whether fiscal policy can provide them in the absence of a NGDP-stabilizing monetary policy.

For more on this excerpt and my views on this matter see here, here, and here.

Posted by David Beckworth at 6:47 PM