At least on this part:

To put it another way: for every worker that construction lost between 2007 and 2010, the rest of the economy lost at least another five workers, rather than gaining workers. I agree with Professor Krugman and other opponents of the “sectoral shifts theory” that something must have happened — in less than a year or two — that profoundly affected practically all industries and practically every region.

Mulligan is right that something suddenly happened that affected economic activity in every region and every industry.  I date this development to about mid-2008 as can be seen in the following figures.  The first one shows that despite the start of the housing recession in April, 2006 employment in the rest of the economy continued to grow through early 2008: 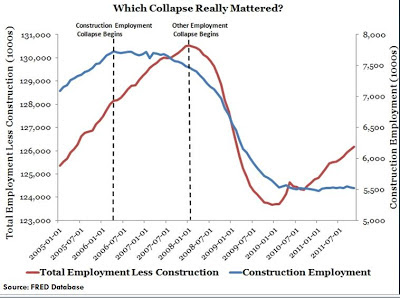 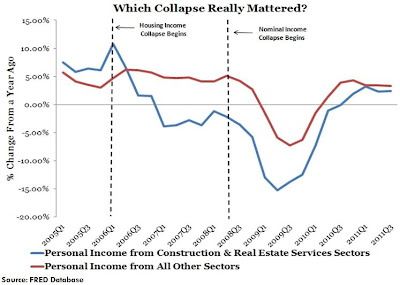 So, as Mulligan notes, something turned a two-year sectoral recession into an economy-wide one.  Many folks attribute it to the worsening of the financial crisis.  I think a better story is that the Fed passively tightened monetary policy around mid-2008.  A passive tightening occurs whenever the Fed allows total current dollar spending to fall, either through a endogenous fall in the money supply or through an unchecked decrease in velocity.  Given a proper measure of the money stock--one that includes both retail and institutional money assets--this can be shown to be the case for the U.S. economy during this time.  This reduction in broad money assets and the drop in velocity amounts to an excess money demand (i.e. safe asset shortage) problem.

The Fed's failure to stabilize total dollar spending had implications for household balance sheets.  Households had come to expect about 5% annual nominal income growth over the past 25 years or so.  These expectations were assumed by household and firms when they signed long-term nominal fixed debt contracts.  A debt crisis was therefore inevitable when these long-term nominal income forecasts were not realized.

Now Casey Mulligan thinks it was a change labor market incentives brought on by government policies that caused the economy-wide collapse.  I agree with Mulligan's premise that these policies do change incentives, but am not convinced that magnitudes are large enough to explain the severity of the past four years.  A far easier story to tell is there has been an excess demand for money assets (i.e. a shortage of safe assets).  For households this is a particularly compelling story: 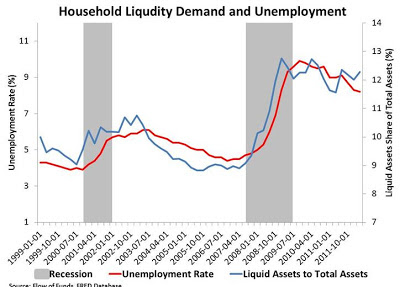 Here's hoping that Mulligan, who has done extensive work on money demand, can weave this story into his narrative of the crisis.
Posted by David Beckworth at 4:38 PM