The Fed, The Budget Deficit, and The Facts

My last post generated some heated push back from the hard-money types.  That post showed the Fed sill has about the same share of treasuries, 15%, as it did before the crisis.  Thus, the large run up in public debt over the past four years has been funded mostly by individuals, their financial intermediaries, and foreigners.  The Fed has not been the great enabler of the government deficits as claimed by the hard-money types.  This fact seems to have been very uncomfortable for them because they largely ignored it.  Instead, they quibbled with my definition of debt monetization and resorted to ad-hominen attacks.

Given these responses, it is probably too much to hope for further meaningful engagement with them. But in the event some are still listening, here are some additional points I hope they consider.

First, safe asset yields across the globe have been falling for the past four years.  Even more remarkable, is that the yields have been falling in a similar pattern.  This can be seen in the figure below which shows the long-term government yields for Canada, Germany, Japan, the United States, and the United Kingdom.  U.S. monetary policy cannot explain this worldwide phenomenon. 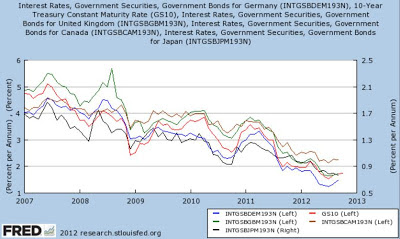 It was already hard to explain the decline in U.S. yields by looking to U.S. monetary policy.  The Fed only holds about 32% of long-term treasuries and the long decline began well before Operation Twist.  The similar decline among all these different long-term government interest rates only further undermines the view that Fed is enabling the low U.S. treasury yields.  A much simpler explanation for the low interest rates is the ongoing economic slump that keeps the demand for safe assets elevated.

Second, the Fed and U.S. Treasury Department have been pursuing opposite objectives with regard to the maturity of the publicly-held debt.  The Fed has been trying to shorten the maturity with Operation Twist while the Treasury Department has been trying to extend it.  The figure below sums up this tension nicely. It shows the average maturity of marketable debt has been growing and is projected to grow more.  Thus, the Treasury is offsetting the Fed's Operation Twist efforts and will continue to do so.  Surely if the Fed was working to enable the budget deficits it would coordinate with the Treasury department. 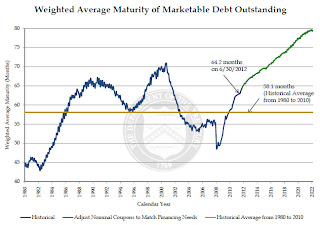 Third, even if the Fed were responsible for the low yields it has failed to generate upward inflationary pressures.  For four years hard-money types have been warning about inflation exploding.  This has not happened and indicates that treasury yields are not being held below their natural rate level, the interest rate consistent with the economic fundamentals. This indicates that should the Fed preemptively raise interest rates, as some have suggested, it would not spark a recovery but choke the already weak economy.

Fourth, the hard-money types have overlooked the safe asset shortage problem that has emerged over the past few decades and its implication for U.S. treasuries.  Over this time the global economy has grown much faster than its ability to produce safe assets.  As a consequence, the world has been turning increasingly to the U.S. financial system to create safe assets, particularly U.S. treasuries.  This means the demand for U.S. debt is higher than would otherwise be the case.  It also means for the world financial system to operate smoothly it needs the U.S. government to run budget deficits.  A failure to do so will only drive safe asset yields lower and intensify the all the problems associated with low interest rates. The crisis has only intensified this development.  This means that the rest of the world may continue to enable our budget deficits for some time.

Finally, my view of debt monetization is that it occurs when monetary policy causes the stock of money assets to unexpectedly exceed the real demand for them.  When that happens, the resulting inflation will be higher than anticipated and erode the real burden of the public debt.  This increase in the money supply may also temporarily push interest rates lower and reduce the government's financing costs.  Note, though, for there to be debt monetization it is not enough to say the Fed is purchasing treasury assets.  Such purchases could simply be keeping the money supply in line with real money demand.  Asset purchases by the Fed, therefore, do not necessarily lead to debt monetization.  In fact, the evidence currently points to the opposite problem, an excess demand for money assets.

For all these reasons, I find it hard to stomach the claims of folks who say the Fed is enabling the large budget deficits.  One such claim by former Fed officials is what motivated the previous post. Equally troubling is this one from the Shadow Open Market Comittee:

The Fed is facilitating the government’s massive deficit spending by lowering the government’s debt service costs and by neutering market discipline on fiscal policy... the Fed is effectively preventing the fixed income markets from sending out warnings about fiscal policy and disciplining policymakers. The “bond vigilantes” of the past that effectively disciplined Washington have been pushed to the sidelines. The old adage “don’t fight the Fed” certainly rings true when the Fed is the biggest holder and purchaser of US Treasury bonds, signals its intentions to keep bond yields low until labor markets improve significantly, and expresses its tolerance—and even advocacy—of a rise in inflation above its stated target.

These type of wild claims that point to debt monetization simply do not stand up to the data.  I agree we need a conversation on what the Fed should be doing, but before we can even do that we need to have our facts right.  Here is hoping this post is a push in that direction.
Posted by David Beckworth at 9:08 AM