[T]he record shows that total federal government outlays were 25.2% of GDP in 2009, 24.1% of GDP in 2011, and 22.8% in 2012...Both outlays and receipts are, as a share of GDP, below pre-crisis level... the "austerity" of 2011-2012 wasn't "austerity" but austerity. Federal government spending fell by a meaningful share of GDP over that period. So did federal government employment, which dropped by 31,000 jobs in 2011 and 45,000 jobs in 2012. What's more, we have good reason to believe that these cuts entailed positive multipliers above those we'd observe in normal times. You don't have to take the IMF's word for it; even stimulus sceptics like Valerie Ramey find that multipliers may sometimes be above normal, and above one, during periods of economic slack.

This is exactly the case that I have been making. And apparently so has Goldman Sachs. The only additional point I have stressed is that despite this austerity happening at a time of high unemployment and a large output gap, a slowdown in aggregate demand growth has failed to materialize. This does not mean fiscal policy multipliers are small--they may be large--but only that the Fed has been offsetting the drag created by the fiscal austerity.  And to boot, it has done so in an environment where the short-term interest rate is up against the zero-lower bound (ZLB). Monetary policy, therefore, is not out of ammunition at the ZLB, as I noted in my last post on this issue.


Just to be thorough, below are some figures that demonstrate the fiscal austerity observed by Ryan Avent. First, here is total federal government expenditures in current dollars. It has stalled and gradually started to fall: 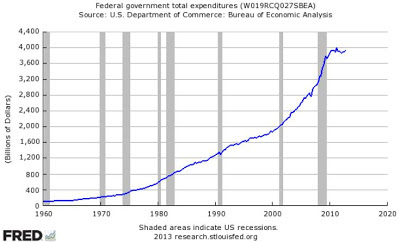 As a percent of NGDP, total federal government expenditures is steeply falling. Not exactly a Keynesian prescription for stable aggregate demand when the economy is far from full employment: 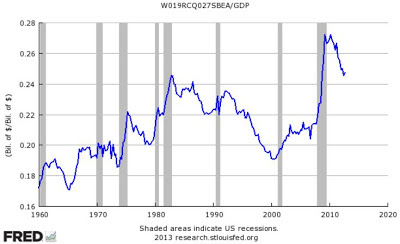 If we look at the federal government deficit, whether in dollars or as a percent of GDP, it too indicates increasing fiscal austerity given the ongoing slack in the economy. Recall that running a deficit is how the government takes "idle" private-sector savings and puts it to "productive" work. Less and less of this transformation is being done: 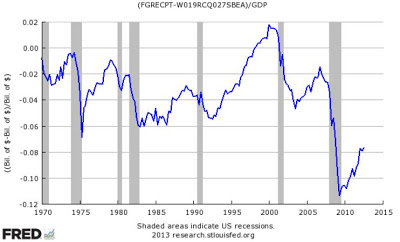 Finally, if we look at those components that make up the "G" in GDP (i.e. Y=C+I+G+NX) in inflation-adjusted terms we see that G has been unequivocally falling: 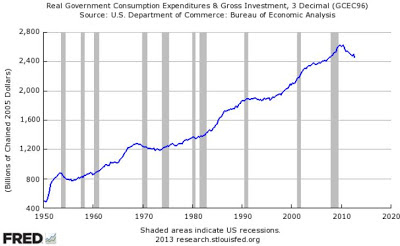 Now this fiscal austerity is mild compared to what is proposed to happen going forward. But it is still fiscal consolidation and given large fiscal multipliers--which are more plausible in periods of significant economic slack like today--we should at least see aggregate demand faltering over the past few years while this unfolded. But in fact, we see relatively stable aggregate demand growth, as measured by NGDP: 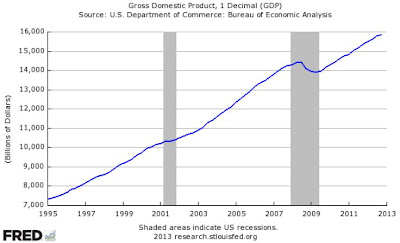 This remarkably stable NGDP growth path since 2009 has occurred despite the fiscal austerity (and a host of other negative economic shocks like the Eurozone crisis, China slowing, debt ceiling talks, and fiscal cliff) and only makes sense if the Fed has been offsetting the fiscal drag.  And again, it has been doing so in a ZLB environment. While the Fed's success here should be recognized, it is also apparent that the Fed has failed to restore NGDP to its pre-crisis trend. This failure to provide "catch-up" nominal spending growth is big black eye for the Fed and is why a NGDP level target is way overdue for the Fed.

P.S. Ramesh Ponnuru and I made a similar argument during the fiscal cliff debacle.
Posted by David Beckworth at 3:30 PM