Is "Precautionary Saving" Still a Problem?

John Cochrane has an interesting post where he considers the various reasons why consumption has failed to return to its trend path. One area where I disagreed with him was this statement:

"[A] more precise version of my first equation adds a "precautionary saving" term. When people are very uncertain about the future, they save more...This story seems possible for 2008 and 2009, in the depths of the financial crisis and recession. But I'm less convinced that it describes our current moment."

As I noted in his comments, it does seem strange to think that almost five years later precautionary savings would still be an important part of the story.  But the data clearly shows that this is the case, as seen in the figure below. The blue line in the figure shows liquid assets (checking and cash, saving and time deposits, money market accounts, and treasuries) of households as a percent of total household assets. Now this indicator is really a measure of liquidity demand, but it gets at the same notion as precautionary savings. The red line shows the unemployment rate. 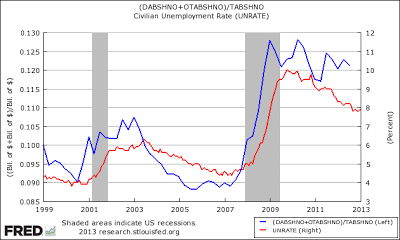 The figure indicates that liquidity demand rises before recessions and leads changes in unemployment. (Josh Hendrickson and I show in a paper that this indicator is systematically related to swings in aggregate nominal expenditures.) More importantly, this measure of liquidity demand still remains elevated to this day. So yes, precautionary savings (or precautionary demand for liquidity) still appears to be an important part of the ongoing slump.

P.S. This elevated demand for liquidity is just another way of seeing the inordinately high risk premium problem.
Posted by David Beckworth at 9:18 AM