Thoughts for the Weekend

First, don't be derpy. In my previous post I presented evidence that small business are very concerned about Obamacare and, as a result, are cutting back on employee hours. The evidence came from three surveys--NFIB, Gallup, and Foundation of Employee Benefit Plans--and a list of firms who have cut hours because of the ACA. Despite this evidence, some observers were feeling derpy and rationalized it away. As a follow up, Jed Graham sent me an article that further supports the claim that Obamacare is reducing hours worked. Specifically, it shows hours worked for low income workers starting to fall. Casey Mulligan makes a similar point here. The real question, in my view, is how big of an effect this will have on the labor market. Here I think reasonable people can disagree. Meanwhile James Pethokoukis summarizes we know so far about the implementation of the ACA.


Second, can you see what I see? Paul Krugman reminds us that we are coming up on the five year year anniversary of being at the ZLB. He tells us that in this strange world everything changes:

[Hitting] the zero lower bound changes everything. It’s not just that the rules change for monetary policy, although they do: some people have been warning for the whole five-year period that the surge in the monetary base will cause runaway inflation, and it keeps not happening. It’s also true that we enter the territory of paradoxes; the paradox of flexibility, but also, and more crucially, the paradox of thrift, in which attempts by some players in the economy to save more end up leading to less, not more, investment. 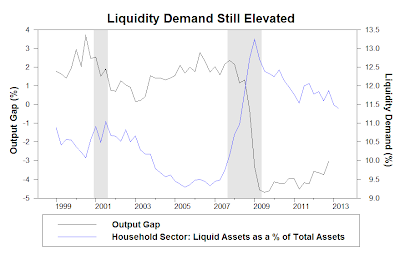 This figure shows that the BIS finance neutral output gap is negatively related to the share of liquid assets being held by households. This liquidity demand measure also tracks the inverted real SP500 closely as seen below. This figure illustrates the portfolio rebalancing channel: as households decrease their liquid assets holdings and shift to riskier assets, those riskier asset prices soar. The Fed job, then, is to conduct monetary policy so that the right amount of rebalancing (i.e. the amount the closes the output gap) take place. 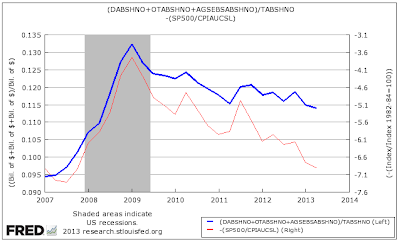 One area where I concede that ZLB in and of itself matters is that it leads to market segmentation between transaction assets and other assets.  This is a big deal and explains why we still have a safe asset shortage problem.

Third, model this wise guy. Cardiff Garcia points us to a new paper by Ricardo Caballero and Emmanuel Farhi. They develop a model that, among other things, implies the Fed's treasury purchases are harming the economy because they are removing safe assets from the financial system. This is an increasingly popular critique that I believe is wrong and said so here and here. I now have a model that bears this out. Josh Hendrickson and I coauthored a paper where a monetary search model is used to motivate transaction assets. With this model, we show that by properly managing expectations, the Fed can increase the supply of private label safe assets and at the same time reduce the demand for public safe assets. In other words, the Fed can solve the safe asset problem by improving the economic outlook. This really should not be shocking, but it is implicit in many of the arguments against QE. We also do some cool counterfactual forecasts that show what would happen to the stock of safe assets if the Fed did a better job managing NGDP expectations. Check it out.
Posted by David Beckworth at 4:29 PM