A recent Federal Reserve paper makes the case that potential GDP is to some extent endogenous to aggregate demand shocks:

The recent financial crisis and ensuing recession appear to have put the productive capacity of the economy on a lower and shallower trajectory than the one that seemed to be in place prior to 2007... [We] argue that a significant portion of the recent damage to the supply side of the economy plausibly was endogenous to the weakness in aggregate demand—contrary to the conventional view that policymakers must simply accommodate themselves to aggregate supply conditions. Endogeneity of supply with respect to demand provides a strong motivation for a vigorous policy response to a weakening in aggregate demand.

One example of this phenomenon would be workers who had up-to-date skills and were productive, but lost their job because of the Great Recession. Over time, their skills became obsolete and they went from being cyclically unemployed to structurally unemployed. What started as an aggregate demand problem slowly became an aggregate supply one. It is therefore important to respond to aggregate demand shocks quickly and thoroughly to prevent this from happening.


I believe another example of this endogenous aggregate supply response is the decline of expected productivity growth. This can be seen in the figure below. It comes from the Survey of Professional Forecasters and shows the expected average productivity growth rate over the next 10 years. It reveals a run-up in the expected growth rate in the late 1990s and early 2000s that corresponds to the technological advances and opening up of Asia during that period. Since 2006 it has persistently declined. This is a big deal since a decline in expected productivity growth means firms will come to expect lower returns on capital expenditures and households will come to expect lower future income growth. Firms and households will cut spending accordingly. But this expected decline in aggregate supply growth is probably an overreaction. It is hard to believe that all the productivity advances from technology and the opening up of the global economy permanently disappeared because of the Great Recession. Rather, I see it as an endogenous aggregate supply response that should largely self-correct as the economy returns to full employment.1 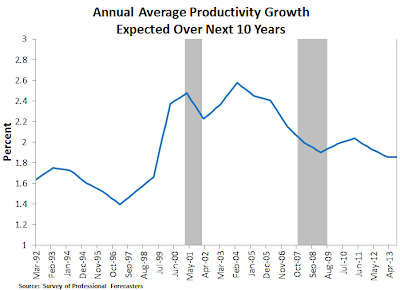 The Fed paper behind this is getting a lot of attention, but it is important to note that Mark Thoma made the same point almost a year and half earlier. He does a good job illustrating the idea with the following figure. Here, Y*SR is short-run endogenous aggregate supply, while Y*LR is the long-run or full potential amount of aggregate supply:

Here is how Thoma describes it:

Up until the point where the line splits into three pieces, assume the economy is in long-run equilibrium with output at the natural rate...Then, for some reason, aggregate demand falls leading the economy into a recession. As AD falls, people are laid off, equipment is stored, factories are shuttered, and so on and the economy's capacity to produce falls in the short-run as shown by the blue line on the diagram.

But this is a temporary, not a permanent situation. Eventually people will be put back to work, trucks in parking lots will be back on the road, factories will reopen -- you get the picture -- and productive capacity will grow as the economy recovers. I believe many people are treating what is ultimately a temporary fall in capacity as a permanent change, and they are making the wrong policy recommendations as a result.

In fact, there's no reason to think productive capacity can't return to its long-run trend just as fast or faster than output can recover. If so, then it would be a mistake to do as many are doing presently and treat the blue short-run y* line as a constraint for policy, conclude that the gap is small and hence there's nothing for policy to do. Capacity will recover...

In terms of our earlier examples, this understanding means the now structurally unemployed individuals will find it far easier to retool and get back into the labor force if the economy is humming at full employment. And the existing productivity gains will be better appreciated in a robust economy, thereby raising long-run expected growth.

There are, though, potential drags on the aggregate supply that could prove more lasting. For example, the ACA may have non-trivial effects on the labor supply according to Casey Mulligan. The question is how big of an effect developments like these will have on trend growth. Even if large, they still could be offset by further productivity gains. Ultimately, this is an empirical question.
Posted by David Beckworth at 11:40 PM