Three Questions Janet Yellen Should Have Asked the Senators

Janet Yellen's confirmation hearing was today and, as expected, she got asked tough questions. It would be nice if she could return some of her own tough questions to the Senators. Here are three questions that would challenge the thinking of many and hopefully start a productive conversation on Capitol Hill. The questions are presented in graphical form, followed by a few comments: 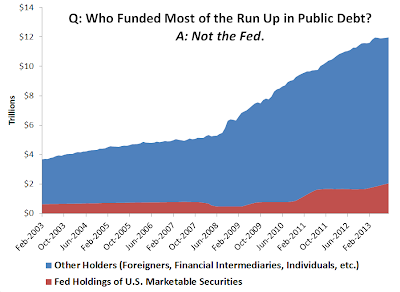 Comment: Since most of the marketable public debt was not purchased by the Fed, it is not the main reason for the long decline in treasury yields. The Fed may have pushed down the term premium a bit, but overall the weak economy is the culprit. This can be seen, for example by looking to the decline in real interest rates that occurred after QE2 ended and before QE3 started. Even the Fed's forward guidance is itself a function of expected growth rate of the economy. So no, the Fed did not enable the large federal budget deficits with low financing costs. 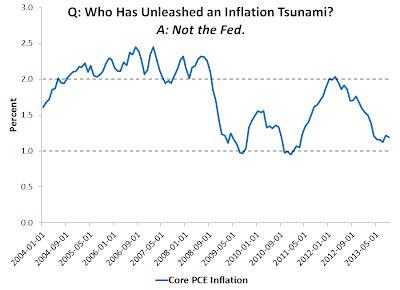 Comment: If anything, the Fed has been systematically undershooting its 2% inflation target as seen above. It seems the Fed views it inflation target as an upper bound to an 1-2% target range. Yes, the Fed has been creating a lot of monetary base, but it also clearly signaled this expansion is temporary. Only a permanent, unsterilized expansion of the monetary base would make a difference. The Fed's inflation-fighting credibility is so strong that absent a major regime shift, like the introduction of Abenomics in Japan, one should not expect the current expansion of the Fed's balance sheet to create a surge in inflation. 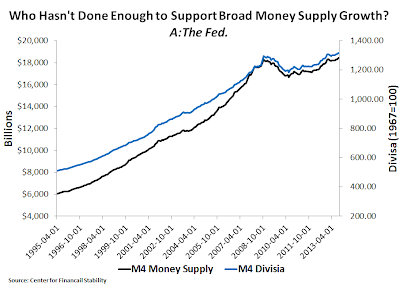 Comment:  The absence of robust broad money supply growth means the economy is still starved of the monetary assets needed to restore full employment. The Fed could be doing more to correct this shortfall. No, the Fed does not directly create inside money assets, but it can meaningfully influence their production by making the right signals about the future path of monetary policy. For example, a regime change to a nominal GDP level target that required aggressive catch-up growth would do just that. It would signal that the Fed plans to allow some of the Fed's expanded balance sheet to become permanent. That matters, because it means a higher-than-expected price level in the long-run. A higher-than-expected price level in the future means investors will begin adjusting their portfolios today. The portfolio rebalancing, in turn, will mean more aggregate demand today. So yes, the Fed has not unloaded both barrels of the gun when it comes to supporting broad money supply growth. (Wonkish note: this understanding is theoretically and empirically shown here.)
Posted by David Beckworth at 1:46 PM