Taking the Model to the Data

Stephen Williamson has generated something of a firestorm by arguing the Fed's QE programs have actually been lowering inflation over the past three years. His argument is based on a new paper of his that builds upon the monetary search framework of Lagos-Wright (2005). I actually like this approach to modeling money-like assets, but the implications Williamson draws about QE has Nick Rowe, Brad DeLong, Paul Krugman, and Scott Sumner up in arms. David Andolfatto valiantly rides to Williamson's defense (update: so does Noah Smith) only to be rebuffed again by Nick Rowe.

I do not want to rehash their arguments here, but I do want to respond to a challenged made by David Andolfatto:

It seems to me that the critics should have instead attacked his results and interpretations with empirical facts (or am I too old-fashioned in this regard?).

Okay, David wants us to take Stephen Williamson's model to the data. Stephen probably thinks he has already done so with this figure of PCE inflation. However, one cannot really draw any conclusion using headline PCE inflation because it has embedded in it supply shocks and other temporary perturbations completely unrelated to monetary policy. This is why the Fed and others look at core PCE inflation. For these reasons, I too will use the core PCE inflation measure here as we empirically examine Williamson's claims.


Below is the figure for core PCE inflation. Williamson's argument is premised on inflation falling over the past three years. This figure suggests something else has been happening: it has been bouncing between 1% and 2%. Ryan Avent argues this is intentional. The Fed's 2% inflation target is actually an upper bound. According to this view, the Fed is more concerned about preserving its inflation-fighting credibility than it lets on in public and effectively is keeping one foot on the brake and one on the gas pedal so that inflation stays in the 1%-2% range. In any event, the point here is it is not clear that inflation has been trending down for the past three years. 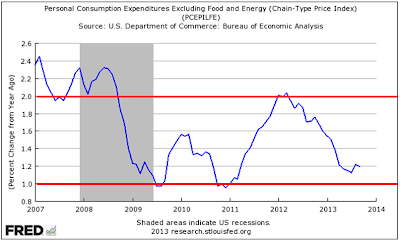 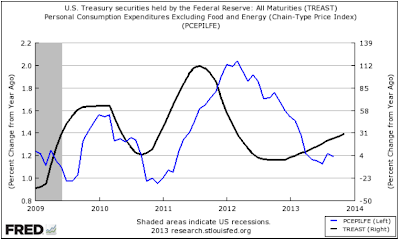 To verify this 'eye-ball test', I put the two series in a vector autoregression (VAR) and estimated it once with 6 lags and once with 12 lags. The data was monthly and I estimated the model for the 12/2007-9/2013 period. Below is the Core PCE inflation impulse response function (i.e. typical response) to a positive standard deviation shock to the year-on-year growth rate of the Fed's treasury holdings.The first figure shows the response for the 6-month lag VAR and the second figure for the 12-month lag VAR. In both cases core PCE inflation responds in the same direction as the shock with a lag. 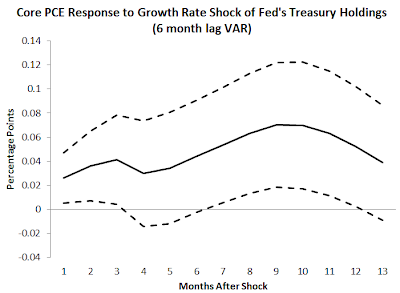 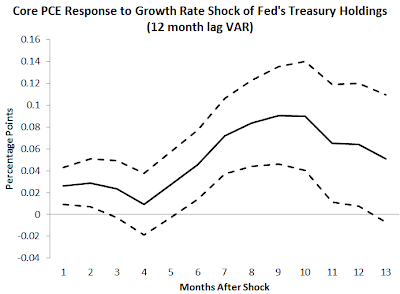 Now these effects are modest, but they go in the opposite direction of that predicted by Williamson. So the data seem to be telling a different story. The Fed's treasury purchases do lead to modestly higher inflation. It is nothing to write home about, but it is definitely not disinflationary.

Again, I like the Lagos-Wright (2005) approach promoted by Williamson. In fact, Josh Hendrickson and I have a paper built on it. In our extension of the model, QE programs can pack a real economic punch if the monetary base injections are expected to be permanent. This is because a permanent injection is expected to permanently raise future nominal income which in turn relaxes current borrowing constraints. The implications of our model, then, is that the Fed's QE programs have not been as effective as they otherwise could be, because all along the Fed has signaled its asset purchases are temporary (though QE3 has added some permanence with its conditional nature). This point about permanent monetary injections is not novel. It has been made many times before by Paul Krugman, Michael Woodfod, Scott Sumner, Bill Woolsey, and others. It is also a point I repeatedly make on this blog. Finally, it is why so many of us are big supporters of level targeting.


P.S. The success of monetary policy in Japan under Abenomics is also hard to reconcile with Williamson's model. Here too, I believe the results are due to the expected permanence of the monetary base expansion.

Update: Mark A. Sadowski provides further empirical evidence that runs contrary to Williamson's claims.
Posted by David Beckworth at 6:00 AM