How is Abenomics Doing?

In my previous post, I noted how the monetary policy portion of Abenomics (the "first arrow") appears to be working. Japan has grown more rapidly than the United States and the Eurozone. This success appears to be the result of its new found enthusiasm for monetary policy. And it is not just any kind of monetary policy, but one that signals a regime change at the Bank of Japan. This regime change commits the Bank of Japan to raising the nominal size of the economy by permanently expanding the monetary base. Martin Wolf agrees:

Of the three arrows, the first is most likely to hit the target. In January the Bank of Japan adopted an explicit target of 2 per cent consumer price inflation. But it was only after the appointment of Haruhiko Kuroda, an outsider, as governor that a new approach was born. Under his leadership, the bank announced its ambitious programme of “quantitative and qualitative easing”, or QQE. The aim is to deliver the inflation target “at the earliest possible time, with a time horizon of about two years”. The central bank committed to doubling its holdings of Japanese government bonds over two years and more than doubling the average maturity of those holdings. Christina Romer of the University of California, Berkeley, former chair of the US Council of Economic Advisers, hailed this as a “regime shift”, comparable to America’s decision to go off the gold standard in April 1933.

Japan, too, has grasped the nettle, breaking free of its deflation trap with the most radical policy experiment of modern era...After two decades of monetary tinkering the Bank of Japan is mopping up 7.5 trillion yen worth of bonds each month, almost as much as the Fed in an economy barely more than a third the size. It is buying long-term debt for the first time...

Japan was the fastest growing economy in the OECD bloc in the first half of this year. There was a hiccup in the third quarter, causing the faint-of-heart to write off Abenomics. Yet Nomura's Shuichi Obata says the December Tankan survey of business shows that confidence is at last spreading from big companies to small firms, with the services index rising above zero for the first time since 1991.

Michael T. Darda, Chief Economist of MKM Partners, tells us that not only has Japan done well so far, it looks set to do well again next year:

Leading indicators in Japan have been on the upswing. The OECD’s Leading Index and the Tankan business sentiment survey have been in multi-month upswings, suggesting faster future growth. 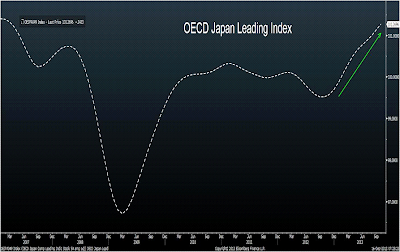 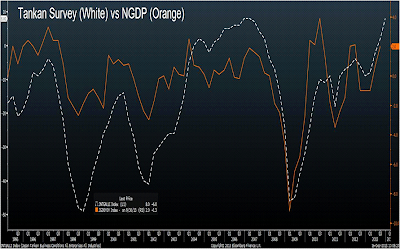 In other words, Abeonomics is working. One reason that the previous round of QE in Japan didn’t lift growth much is that it was expected to be temporary and proved to be temporary as occasioned by a 20% collapse in the monetary base in 2006. This time, however, at least part of the increase in the base is expected to be permanent, hence the new 2% inflation target. In short, the BoJ has to do enough to satiate a broad money demand function that has been growing 2-3% per annum.  (DB: for more on the importance of permanent monetary injections see here) 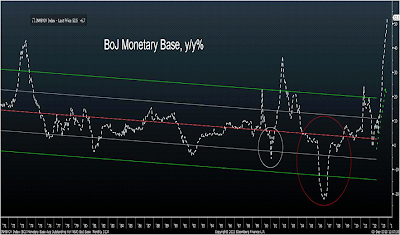 Reflation should help to ease Japan’s debt and fiscal burden. One reason for Japan’s high debt ratio (perhaps the main one) is that nominal GDP growth has been trending at zero for more than 15 years. That means at any positive nominal bond yield, the debt ratio is likely to rise. Thus, restoring at least moderate NGDP growth should help Japan’s budgetary fortunes. This is one reason that the rise in Japan’s inflation breakeven spreads has been inversely related to credit default swap spreads on Japan’s debt. 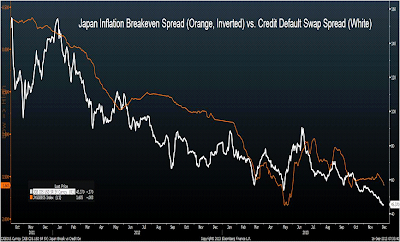 Broad money growth in Japan has begun to recover convincingly, which should also be bullish for the equity market. Broad money growth now has exceeded to growth rates last seen during Japan’s multi-year growth period of the early 2000s. Milton Friedman would be proud, as he advocated the policies now going into place back in 1998. We believe Japan equities have 20-40% upside, assuming the valuations seen back in the early 2000s are met or exceeded. 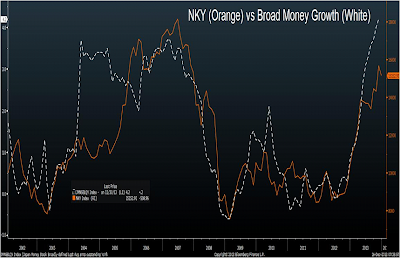 This is great news for Japan. However, as Martin Wolf notes, this first arrow only addresses the cyclical portion of the Japanese economy. There are still huge structural problems that seem unlikely to be resolved anytime soon. Still, this is one big step forward for an economy burdened by malign deflation for the past few decades.
Posted by David Beckworth at 11:16 AM