Should We Be Worried?

A number of Fed watchers see the last FOMC meeting signalling a tightening of monetary policy.  Tim Duy, for example, sees it in the FOMC's effective lowering of its inflation target via the dropping of the Evans Rule:

Others see it in the moving forward on the calendar of the first federal funds rate hike as seen in the FOMC projections or in the shifting of the FOMC conversation to when the policy rate hike will occur. Here is Ylan Q. Mui:

The nation’s central bank said Wednesday it will look at a broad swath of indicators... as it determines when to raise rates for the first time since the recession hit. The deliberately vague wording is a retreat from the Fed’s concrete promise to leave rates untouched. Though they disagree on when to act... the statement signals the moment has finally come within striking distance.

Gavyn Davies sees these developments as part of a longer tightening cycle that has been going on for some time:

[I]n a wider sense there has been an unmistakable shift in the FOMC’s centre of gravity in the past few months. The key to this shift is that the mainstream doves who have dominated policy decisions in the past few years have now essentially stopped arguing against either the tapering of the balance sheet or the start of rate hikes within about a year from now.

I found this interesting because on one hand we would expect some pulling back of monetary policy as the economy recovers. In this case, we would not call it tightening, but adjusting the stance of monetary policy to its new neutral position. For example, as the the economy recovers the market-clearing or 'natural' interest rate will rise. The Fed could be simply indicating its plans to match the expected rise in the natural interest rate. Doing so would not be tightening. On the other hand, it is possible the Fed is getting ahead of itself and pulling back too fast. In this case, the Fed would be rising its target policy rate higher than the expected natural interest rate. If so, this would begin choking off the the recovery.


So which one is it? Over the past few months I have been leaning toward the former view. I believed the Fed was not tightening policy, but simply adjusting it to match the recovery. Lately, though, I am not as certain. What gave me pause were the two figures below. The first one shows the bond market forecast of average annual inflation over the next years: 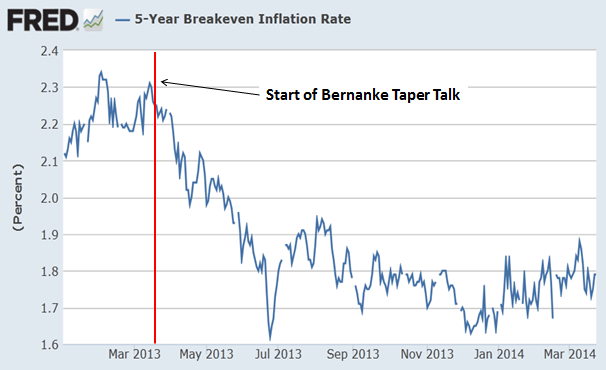 The figure shows that since Bernanke's initial tapering talk the inflation forecasts have fallen from 2.3% to about 1.8%. That is a sustained 50 basis point drop. I do not see any evidence in the productivity numbers to indicate the expected inflation decline is from productivity gains, so it leaves me thinking that the bond market sees lower nominal spending ahead. If so, Gavyn Davies is right that the recent FOMC meeting is part of a larger tightening cycle.

The second figure shows the year-on-year growth rate of the Divisa M4 money supply. This is a measure of money that includes both retail and institutional money assets. It also accounts for the different degrees of liquidity of the assets in its construction. This series started declining before Bernanke's taper talk, but has continued to be on a downward trend ever since. If it continues we could be looking at a burgeoning excess money demand problem. 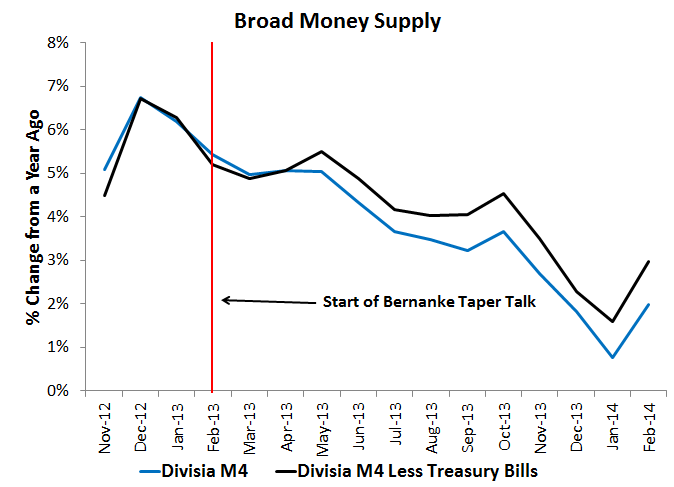 One interpretation could be that the monetary policy tightening implied by the breakeven graph above is leading to less inside money creation as the economic outlook gradually weakens. The March FOMC meeting would be a continuation of this tightening cycle. The problem with this view is that I have a hard time finding other indicators that point to economic weakening ahead. Yes, one can point to evidence that there is still slack in the economy, but it is harder to find evidence that the slack is increasing. Maybe bond markets are simply pricing the 2% upper ceiling that has been in the FOMC central tendency forecasts. Also, the M4 growth decline could be due to regulatory contraction in institutional money assets. These charts may be red herrings, but they do give me pause. These type of declines in the past signaled future economic weakness. Should we be worried now?
Posted by David Beckworth at 9:42 PM