The President's Economic Report and the Right Counterfactual

A common mistakes observers make when assessing economic policy is that they fail to do the counterfactual of no policy. That is, they fail to consider what the economy would have been like in the absence of the policy. This often happens in critiques of monetary policy. It also happens with critiques of fiscal policy. The new Economic Report of President acknowledges this point:

Evaluating effects of fiscal policy in general, and the Recovery Act in particular, is challenging for several reasons... A key issue is that estimating effects entails comparing what actually happened with what might have happened (what economists call the “counterfactual”)[p.105-106].

The White House believes the proper counterfactual for the American Recovery and Reinvestment Act of 2009 is to imagine how much worse off the economy would be in its absence. I am not sure, though, that this is the right counterfactual. For we saw in 2013 that Fed policy offset to some extent the tightening of fiscal policy. This suggests that it might have done more in 2009 had there been no fiscal stimulus. Ramesh Ponnuru, presents this view in a recent Bloomberg article:

To the extent that the central bank has a target for inflation (or nominal spending), and has the power to hit that target, the Fed constrains the power of fiscal policy. If Congress tries to stimulate the economy during a slump, for example, the Fed will offset that stimulus by loosening money less. Some of this offsetting will actually be automatic, based on market expectations that the Fed will stay on target. It's likely that if Congress hadn't enacted a large stimulus, the Fed would have done more quantitative easing early on, lowered interest on reserves or taken some other expansionary step.

This is the 'monetary offset' view that has been made by Scott Sumner. It not really a new argument, but the recent emphasis has been that the Fed will still offset fiscal policy even at the zero lower bound and in a slump if it is committed to its target. It may not do so perfectly, but if the Fed chooses it can still dominate fiscal policy at business cycle horizons. This counterfactual thinking is contentious. John Aziz, for example, responded to the Ponnuru piece with this:

Ponnuru's argument isn't that the stimulus caused the Fed to tighten, but that it would have been looser had there been no fiscal stimulus... The hypothesis that the fiscal stimulus limited the Fed in any way is just not supported by the real world record of what the Fed did... [I]n a huge, once-in-a-generation slump, offsetting expansionary fiscal policy just isn't on the agenda.

Aziz, like many, find it incredulous that the Fed would hold back in 2009 because of the fiscal stimulus. Fed officials would never admit doing this directly, but they would  admit to responding to changes in inflation and employment. Consequently, if fiscal policy influenced inflation or employment it indirectly allowed the Fed to hold back some of its firepower. For a believer in fiscal stimulus like Aziz, the logic is inescapable if the Fed is truly committed to its objectives.

This begs the question of how committed was the Fed to it target?  Officially, the Fed has been a flexible inflation targeter (FIT) with a 2% personal consumption expenditure (PCE) inflation target since January, 2012. Many, including former Fed chair Bernanke, argue it has been a FIT for much longer. Many Fed officials prefer the core PCE inflation measure since it is a better indicator of underlying inflation trends. The question, then, is how committed has the Fed been to its inflation target? Has it been so committed that it was slow to go full throttle in 2009 because of fiscal stimulus?

Below is a figures that sheds some light on this question. It shows the timing of the Fed's QE programs and changes in the core PCE inflation rate. The figure indicates several possibilities. First, the FOMC runs QE programs when core inflation is under 2% and falling. It also suggest that Fed has had an effective 1%-2% target range for core inflation over the past five years. Had there been no fiscal stimulus and had this mattered to core inflation, this figure suggests that the Fed may have done more sooner. 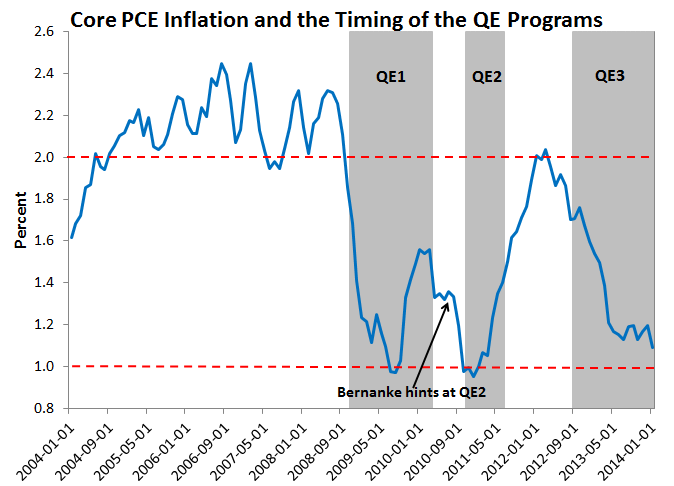 So contrary to Aziz's claim, Ramesh's counterfactual seems perfectly reasonable. Over the past five years the Fed seemingly was committed to targeting a core inflation range of 1%-2%. Consequently, anything that affected core inflation, including fiscal stimulus, also indirectly affected the response of monetary policy.
Posted by David Beckworth at 10:20 AM