The Secular Stagnation Bug is Spreading at the Fed

Speaking of secular stagnation, it appears to be catching on at the Fed. Here is CNBC's Alex Rosenberg:

Is there something seriously wrong with the economy?

It's a scary prospect, and a concern that's gotten louder and louder over the past year. In economic circles, it goes by the alliterative name of "secular stagnation." And it's a phrase that Fed watchers are likely to hear more and more in the months ahead.

Recent comments by the vice chairman of the Federal Reserve, Stanley Fischer, indicate questions within the central bank about whether the slow growth that has followed the recent recession could reflect, or at least could potentially morph into, longer-term issues within the economy. And while Fischer avoided the phrase "secular stagnation" in his Monday speech, Minneapolis Fed President Narayana Kocherlakota is planning to host a November symposium that directly addresses the issue of secular stagnation by name, CNBC has learned. 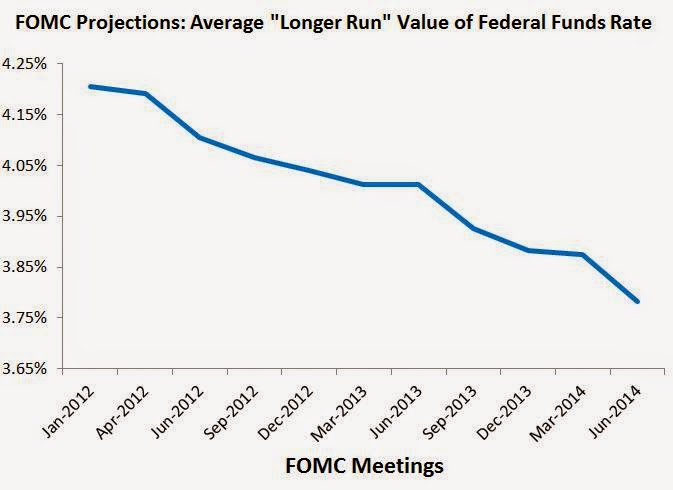 I have a hard time believing the fundamentals warrant this downward revision in the long-run neutral interest rate. Where is the optimism? Clearly, the FOMC members need to drink an elixir of readings by Joel Mokyr, Erik Brynjfolsson and Andrea McAfee, and Marc Andreessen to beef up their technology optimism. And then they could follow it up with a Bill McBride treat of demographic optimism. And to wash it all down, they should finish with a John Cochrane cocktail of secular stagnation skepticism.

Update: I stand corrected. Stanley Fischer in his speech actually leaves open the possibility of strong productivity growth going forward. Good for him! Here is an excerpt and related footnote:


Possibly we are moving into a period of slower productivity growth--but I for one continue to be amazed at the potential for improving the quality of the lives of most people in the world that the IT explosion has already revealed. Possibly, productivity could continue to rise in line with its long-term historical average10

And here is footnote 10

Posted by David Beckworth at 5:01 PM