It is hard not to be cynical when you see charts like this one. It shows what appears to be a systematic relationship over the past 6 years between changes in the Fed share of marketable treasuries and PCE core inflation: 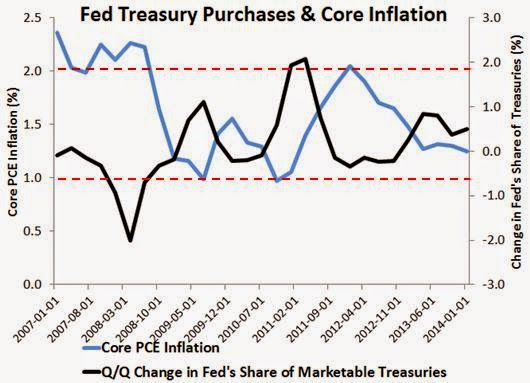 The figure indicates the Fed allows its share of marketable treasuries to change--by either engaging in LSAPs or refraining from doing so as the total share grows--so that core PCE inflation stays in the 1% to 2% corridor. Here is the scatterplot of this data: 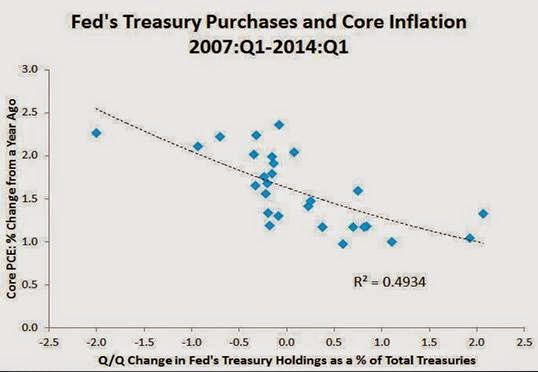 Now this is just a reduced-form relationship, but it is highly suggestive and consistent with my claim from an earlier post that there really is no 2% target. Rather, there is a 2% ceiling to an inflation target corridor. As I showed in that post, the timings of the QE programs tend to line up with this view. The above chart provides further evidence.

P.S. For those observers who are so focused on endogenous money that they fail to see how a central bank can shape the medium-to-long run path of inflation recall what we discussed here and here. A brief excerpt:

Now to be clear, most money is inside money--money endogenously created by banks and other financial firms--and the Fed only indirectly influences its creation. However, it does so in an important way by shaping the macroeconomic environment in which money gets created. Consequently, it can have a large influence on inside money creation. For the same reason it can also influence how stable is the velocity of money. By successfully stabilizing the expected growth path of total dollar spending, the Fed will be causing this seesaw process [offsetting changes in the money supply and money velocity] to work properly.

Posted by David Beckworth at 3:16 PM