Is the U.S. economy in the midst of another bond  market "conundrum"? The last time we had one was in 2005 when former Fed chairman Alan Greenspan became perplexed over long-term interest rates failing to rise with the tightening of monetary policy. Some observers see something similar happening today. They note that the Fed has been tightening monetary policy with its tapering of QE3 and yet the benchmark 10-year treasury interest rate has been falling since the beginning of 2014. This conundrum gets even more interesting when one looks at the five-year treasury interest rate. It has hardly budged since the beginning of the year even as the 10-year interest rate has steadily declined. Jim Hamilton calls these developments the 'bond market condrum redux.'

So what could be driving these developments? Robin Harding and Michael Mackenzie suggest it is the worsening economic conditions in the Eurozone and its implications for ECB monetary policy. Here is Harding-Mackenzie:

The link between US monetary policy and US bond yields has fallen apart this year, showing how fears of deflation in Europe are driving global financial markets. According to analysis by the Financial Times, the correlation between five- and ten-year Treasury yields has fallen to its lowest level on record, with US bonds appearing to track European monetary policy instead.

Five-year bond yields closely reflect the path of interest rates that markets expect from central banks. Ten-year yields normally move in tandem. But so far in 2014, the US ten-year has fallen from 3 per cent to 2.4 per cent – even as news on the economy has got stronger – while the US five-year yield has barely changed.

That is unprecedented: no other global shock going back to the 1960s has ever caused US five and 10-year yields to diverge like this. In recent months, the US 10-year yield has been more correlated with falling five-year yields in Europe.

I think Harding-Mackenzie may be on to something with the Euro zone-U.S. treasury yield connection. It is worth taking a closer look. To do so, we first need to recall that long-term interest rates can be broken down into the following components:


The term premium is the added compensation investors require for holding long-term treasuries over short-term ones. For example, if a financial panic causes a "rush to safety" by investors and they are more willing to hold long-term treasuries, then they will demand less compensation and the term premium will decline. The other component, the average short-term interest rate, is a nominal interest rate and via the Fisher relationship can be further decomposed into real interest rate and expected inflation terms:

Okay, with all that said we can now take a look at these components and assess the Harding-Mackenzie explanation for recent interest rate movements. The figure below shows these series since 2013 (It is constructed using the Adrian, Crump, and Moench (2013) term premium estimates and implied inflation forecasts from TIPs.) 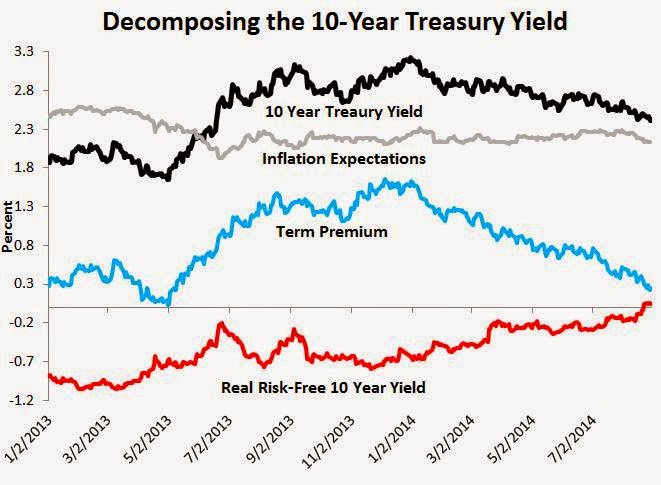 This figure shows two interesting developments since the beginning of 2014. First, the term premium has been steadily falling. This decline could be explained by increasing worries over the Eurozone driving investors on the margin to treasury securities. This is not exactly the Harding-Mackenzie story, but it does provide a potential link between what is happening in Europe and long-term U.S. yields.

Second, the real risk-free rate has been steadily climbing since the beginning of the year. This is consistent with the gradually improving U.S. economic outlook. As I have shown before, short-term swings in this real risk-free interest rate track the business cycle fairly closely. Consequently, this second development should not be surprising.

So on one hand the term premium is arguably falling because of Eurozone woes, while on the other hand the real risk-free rate is rising because of the improved U.S. economic outlook. The term premium decline, however, is larger and on net is dragging down the 10-year treasury yield (given stable inflation expectations).

But what about the 5-year treasury yield? The figure below provides the same decomposition as above and shows similar developments: 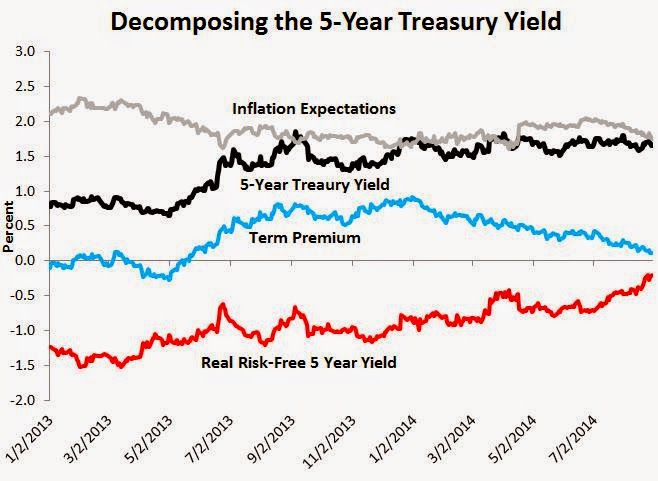 The big difference here is that changes in the term premium and real risk-free rate are much closer in size and therefore closer to offsetting each other. The graph below summarizes these differences. It shows similar increases in the real risk-free yield for both treasury securities, but much larger declines in risk premiums for the 10 year security. 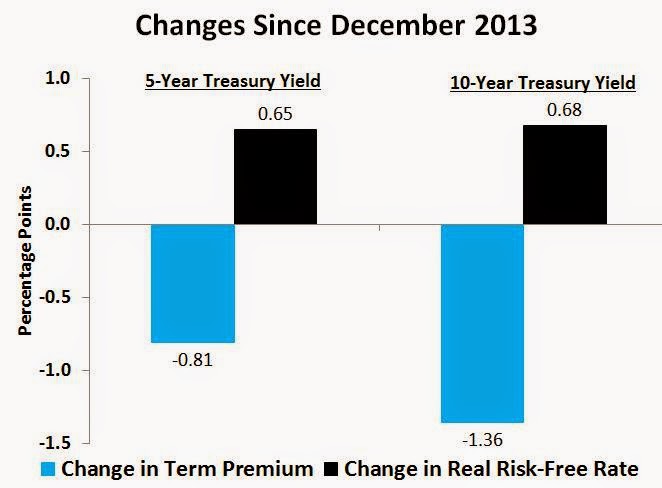 In my view, then, the real bond market conundrum is why has the term premium falling more for the 10-year treasury? Has the flight to safety associated with the Euro crisis been weighted more toward long-term treasury securities? Or is it something else?

Update: See this Bruegel review of blogs for more the bond market conundrum.