A Closer Look at the Decline in Government Expenditures 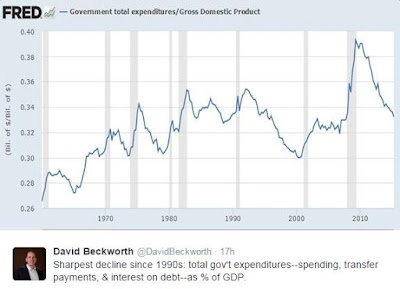 This tweet generated a number of questions that sent me back to the data for a closer look. In the process I gained a few insights that I discuss below. These comments draw upon an excel file that compiles all the relevant BEA data and is accessible here.

First, I want to be clear what the figure above is measuring. It is the sum of government spending, transfer payments, and interest payments across all levels of government. So it is a thorough measure.

I learned, however, that it has one shortcoming: it subtracts out depreciation of fixed government capital which means it actually understates total dollar expenditures. Below is an updated version of this measure that corrects for this practice. As you can see this correction is not too large, it adds only a few basis points and does not change the sharp decline seen since 2010. The huge run up in total government expenditures during the crisis is largely gone. 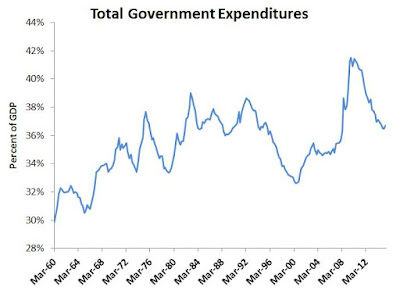 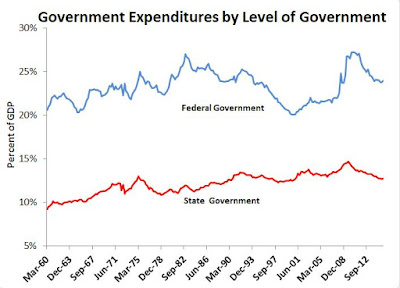 Many commentators seemed curious as to what was driving the sharp decline in expenditures. The figure below partially answers this question by decomposing total government expenditures (at all levels of government) into four categories: consumption and investment spending, transfer payments, interest on debt payments, and other. 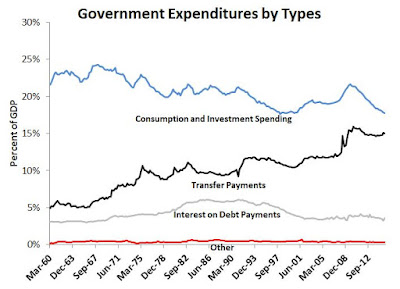 Because of the sequester I was not surprised to see the sharp decline in government spending. I was surprised, though, to learn transfer payments have not come down that much. I was expecting the rise in transfers to be temporary, tied to the business cycle. That seems to be the case for some transfer programs like  programs like unemployment insurance and SNAP.  Maybe the increase in transfer payments reflects the ongoing growth of social security and medicare against a denominator (NGDP) that never has returned to its pre-crisis trend.

The big takeaway, then, is that even though the overall level of total government expenditures as percent of GDP has come back down to pre-crisis levels it composition appears to have permanently changed.

I would also note that even though total government expenditures as a share of the economy has declined, government's reach has only grown through the increasing number of regulations. Patrick A. McLaughlin and others at the Mercatus Center have been quantifying this growth for some time now. Among other things, they have shown the growth of regulations during the time in question above has accelerated. So this post is not arguing the reach of the government into the economy has shrunk. Rather, it is only showing that government expenditures as a share of the economy have fallen to its pre-crisis levels.

Update: Some have questioned whether the striking changes in the graph are nothing more than the changes in the denominator, the sharp collapse in nominal GDP. The answer is no. There were both expenditure increases from the ARRA and decreases from the sequester and other fiscal consolidation measures. Consequently, in current dollar terms that had meant total government expenditures have flatlined since 2010 and fallen in inflation-adjusted terms. So this is far more than a simple story about changes in the denominator.
Posted by David Beckworth at 2:49 PM