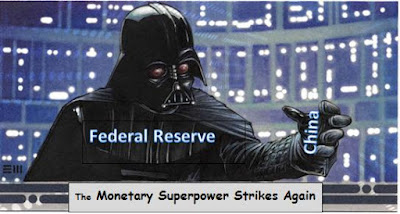 China's economy has been slowing down for the past few years and many observers are worried. The conventional wisdom for why this is happening is that China's demographic problems, its credit binge, and the related malinvestment have all come home to roost. While there is a certain appeal to these arguments, there is another explanation that I was recently reminded of by Michael T. Darda and JP Koning: the Fed's passive tightening of monetary policy is getting exported to China via its quasi-peg to the dollar. Or, as I would put it, the monetary superpower has struck again.

The Fed as a monetary superpower is based on the fact that it controls the world's main reserve currency and many emerging markets are formally or informally pegged to dollar. Therefore, its monetary policy is exported across the globe and makes the other two monetary powers, the ECB and Japan, mindful of U.S. monetary policy lest their currencies becomes too expensive relative to the dollar. As as result, the Fed's monetary policy also gets exported to some degree to Japan and the Euro. This understanding lead Chris Crowe and I to call the Fed a monetary superpower, and idea further developed by Collin Gray. Interestingly, Janet Yellen implicitly endorsed this idea in a 2010 speech:

For all practical purposes, Hong Kong delegated the determination of its monetary policy to the Federal Reserve through its unilateral decision in 1983 to peg the Hong Kong dollar to the U.S. dollar in an arrangement known as a currency board. As the economist Robert Mundell showed, this delegation arises because it is impossible for any country to simultaneously have a fixed exchange rate, completely open capital markets, and an independent monetary policy. One of these must go. In Hong Kong, the choice was to forgo an independent monetary policy.

As in Hong Kong, Chinese officials are concerned about unwanted stimulus from excessively expansionary policies of the Fed and in other developed economies. Like Hong Kong, China pegs its currency to the U.S. dollar, but the peg is far less rigid.

So what evidence is there for this view? First, note that China's accumulation of foreign reserves begins to slowdown at the end of the pre-taper portion of the Fed's QE3 program, something that also happens with the other QE programs: 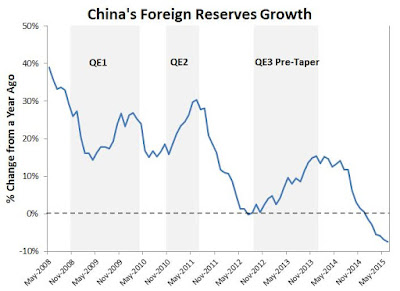 A slowdown in reserve accumulation means a slowdown in domestic money base creation and a tightening of monetary conditions more generally. A close look at the figure shows this slowdown accelerated in mid-2014. So what happen at that time?

This next figure suggests it was an increased tightening of U.S. monetary policy starting around mid-2014. This development can be seen in the rising values of the 1-year treasury rate (an average of expected short-term rates over the next year plus a small term premium) and the trade weighted value of the dollar. Both amount to a passive tightening of monetary conditions that in turn got transmitted into China. 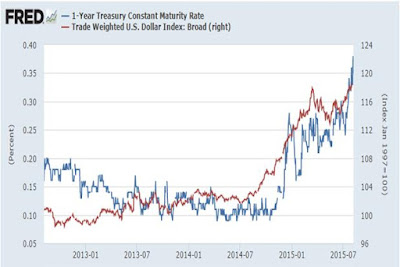 The trade weighted dollar is just one indicator of the stance of U.S. monetary policy. But it seems to be an important one when looking at the U.S. monetary policy-China link over the past decade. It tracks the growth of China's nominal GDP relatively closely during this period. 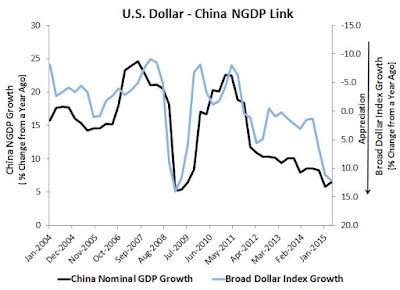 So it appears the monetary superpower has struck again. Maybe it is time for dollar peggers like China to recognize that your tango partner may not have your best interests in mind.
Posted by David Beckworth at 7:41 PM