The Fed Gets What It Wants: A 1%-2% Inflation Target Corridor

So it is finally time for lift off. The Fed is poised to raise short-term interest rates over the next few days after seven long years of ZIRP. Exciting as this development may be, it is important to keep in mind that the guiding principle behind the Fed's decisions during this time has not suddenly changed. This principle says that no matter what happens--whether it be ZIRP, QE, forward guidance, the changing winds of fiscal policy, or the normalization of monetary policy--the Fed must always act in a manner to keep core PCE inflation within a 1-2 percent inflation corridor.

Yes, even though the Fed has an official 2 percent inflation target revealed preferences indicate the real force shaping Fed policy has been a 1-2 percent inflation target corridor over the past seven years. Once you understand this point all other Fed mysteries begin to clear up. For example, why did the Fed sterilize its lending to banks between December 2007 and October 2008? Or, why did it introduce IOR just as the markets were imploding or make the asset purchases under QE temporary? The answer is that it did not want rapid growth in nominal spending--even though it was sorely needed--for fear of pushing inflation too high.  The Fed, in other words, was willing to sacrifice the economy at the altar of the inflation target corridor. This framework is likely to continue going forward.

But don't take my word for it. Let's look to the data and let the FOMC's revealed preferences speak for themselves.

Consider first the central tendency consensus forecasts of core PCE inflation by FOMC members.  The figures below show these forecasts for the current year, one-year ahead, and two-years ahead horizons. A clear pattern emerges from these figures as you expand the forecast horizon: 2 percent becomes a upper bound. FOMC officials, therefore, have been consistently looking at an upper bound of 2 percent for core PCE inflation. If we add to this fact that the FOMC has meaningful influence on inflation several years out, then these revealed preference are saying Fed officials actually want and expect to get an inflation upper bound of 2 percent. This inflation corridor is a choice. 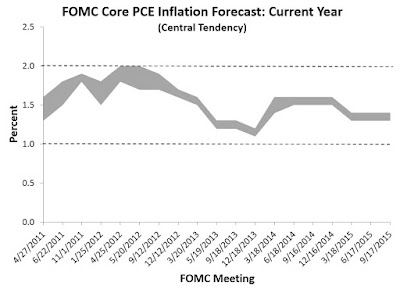 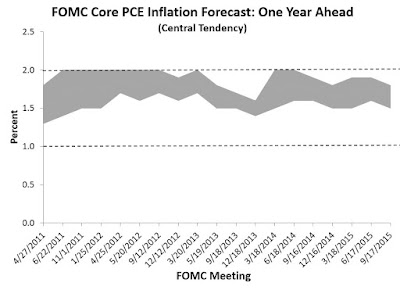 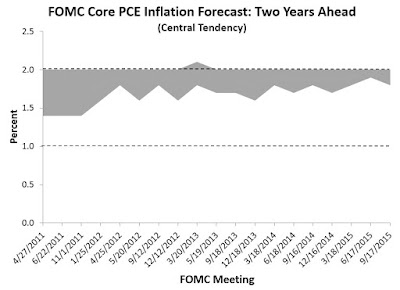 Now consider the actual performance of core PCE inflation since the crisis started. This is where the 1 percent lower bound on the corridor becomes evident. The Fed seems ready to pull the monetary trigger if core inflation drifts too close to this lower bound. Currently, core inflation has stabilized around 1.3 percent but should it start falling again I would not be surprised to see the Fed getting trigger happy once again. 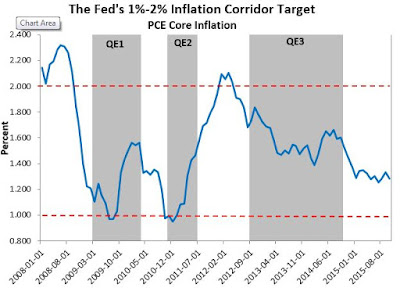 These revealed preferences of the Fed have begun to affect the public's long-term inflation expectations.The figure below shows the annual average inflation forecast over the next 10 years from the Survey of Professional Forecasters. I would not call these forecasts unanchored, but they are gradually drifting down. In the past we worried about expectations becoming unanchored as inflation expectations drifted upward. Now it seems they are drifting in the other direction, though presumably anchored by a lower bound. 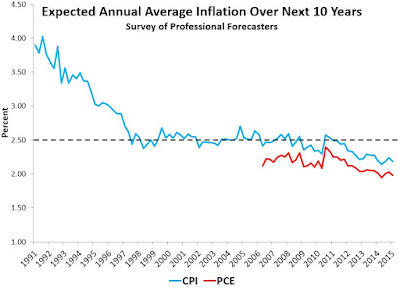 The low inflation environment of the past few years seems entirely in line with the revealed preferences of FOMC officials. There is nothing mysterious about it. Fed officials are getting what they want. Unfortunately, aiming for a inflation corridor of 1-2 percent does guarantee macroeconomic stability. This inflation target range could be either be too tight or too easy depending on the state of the economy. It would be far better for the Fed to simply stabilize the growth path of aggregate spending. Until then, expect the Fed's decisions to be guided by the inflation target corridor.

P.S. See Russ Robert's interview of George Selgin on EconTalk for an interesting discussion where some of the Fed's mysterious actions over the past seven years are discussed.

Update: Janet Yellen, made this point in the press conference following the December 2014 FOMC meeting (my bold):


But it’s important to point out that the Committee is not anticipating an overshoot of its 2 percent inflation objective (p.13).

Posted by David Beckworth at 11:36 PM