What has the 'monetary arrow' of Abenomics accomplished? To answer this question, recall that this part of Abenomics called for the Bank of Japan (BoJ) to double the monetary base and raise inflation to 2%. On the former goal the BoJ has been successful. On the later goal it is still a work in progress, though inflation has been trending upward.

Assessing the Abenomics inflation record is a bit tricky because the 2014 sales-tax hike in Japan put upward pressure on the inflation rate. Nonetheless, after accounting for the tax hike inflation is overall  moving up. This can be seen in the next two figures. The first one shows the core inflation rate since 2000. The second zooms in on the past few years and shows core inflation with and without the tax hike. An upward trend is apparent in this figure. Core inflation is now around 1%, the highest it has been since the late 1990s. So inflation is being pushed up, albeit at a slower paced than originally envisioned under Abenomics. 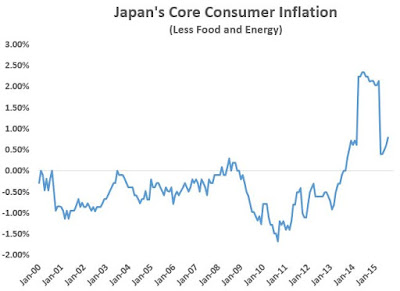 More generally, Abenomics has been mildly successful at reflating the economy. The figure below shows nominal Japan's NGDP with the Abenomics period highlighted in red. It has risen relatively rapidly. 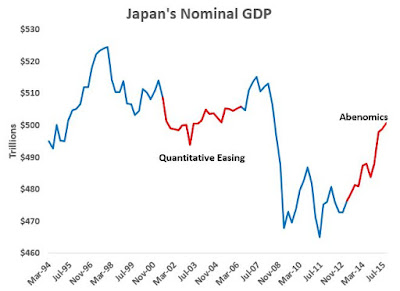 The figure also highlights NGDP during Japan's QE program of 2001-2006. It was comparatively flat and was supported by what turned out to be a temporary expansion of the monetary base. This suggests that at least some part of the monetary base expansion under Abenomics is expected to be permanent.

So the monetary  arrow of Abenomics has been moderately successful at reflating the economy. This reflation, however, has not done much for the real economy. It could do a lot for Japan's debt burden if Abenomics were to continue raising NGDP. And that, in turn, could help reinvigorate the economy. Maybe that is why Prime Minister Shinzo Abe seems so intent on upgrading to Abenomics 2.0.

What is Abenomics 2.0 you ask? It is the Prime Minister's plan to explicitly raise the level of NGDP from its current value of approximately ¥500 trillion up to ¥600 trillion. No, the Prime Minister has not gone all Market Monetarist on us. He is not asking for a growth path target for NGDP, but a one-time 20% increase in the level of nominal spending. Just how ambitious is this goal? Below is a figure plotting out three hypothetical paths to ¥600 trillion NGDP. The five-year path appears to be most in line with Japan's Cabinet Office time frame, as noted by James Cox. By historical standards, this path would be very ambitious for Japan. 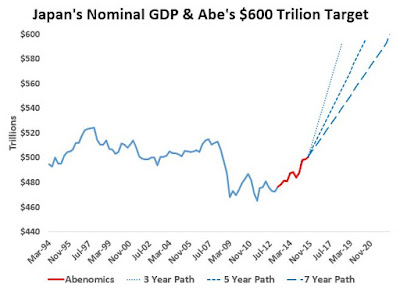 Prime  Minister Abe first called for this this goal in September and spoke to it again last week. Here is the Nikkei Asian Review on his latest speech:

"We are aiming to achieve a virtuous cycle of growth and redistribution with our 'Society in Which All Citizens are Dynamically Engaged' plan. This is our proposal for a new socioeconomic system," the Prime Minister told the group.

"We will aim to build a diverse society where anyone can succeed. That will lead to new ideas, which will lead to further growth. Through growth and redistribution, I believe our target of achieving nominal GDP of 600 trillion yen is well within our reach." Japan's current nominal GDP is around at 500 trillion yen.

Abe told the gathering that the government is putting together a 3.5 trillion yen supplementary budget and that he hoped to use around 1 trillion yen of the extra money on his "Dynamic Engagement" project.

Bank of Japan Gov. Haruhiko Kuroda, speaking at the same forum, gave Abe a vote of confidence, saying the number of "people who say Japan is in deflation has decreased. The bank will continue with its aggressive monetary policy to support corporations' efforts, and, if necessary, will not hesitate in making adjustments."

Delivering multiple speeches on this ¥600 trillion NGDP level target suggests that Prime Minister Shinzo Abe is serious about upgrading Abenomics. It is reminiscent of the fireside chats in the 1930s where FDR was signaling his desire to raise the price level. In both cases leaders were trying to reflate their economies. FDR was partially successfully with reflating, but botched up on the supply side. Prime Minister Abe is trying to get both right with his monetary and structural reform arrows. Here is hoping he succeeds.

P.S. These developments do not bode well for Neo-Fisherism.

Update: Scott Sumner says Abenomics is working even better for the real economy and inflation than I portray in this post. On the latter, he suggests looking to the GDP deflator. It does paint a better picture. 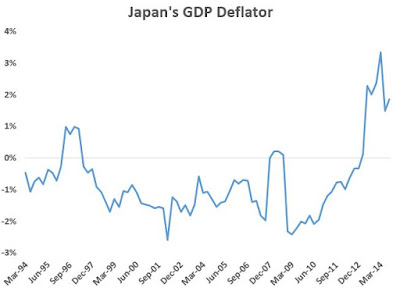 Posted by David Beckworth at 11:13 PM