I have a a couple of pieces out this week on the Fed. The first is an article in Politico on the Fed's influence on the global economy. Here are some excerpts:

Through both its policy actions and its written words, the Federal Reserve has mistakenly tightened monetary policy in fear of rising inflation. That mistake has not just hurt the U.S. economy, it is reverberating around the globe.

This week, the Fed has an opportunity to admit its error when the Federal Open Markets Committee meets to set monetary policy. It’s critical that Fed board members understand how their actions are hurting economies around the world, which has a corresponding negative effect on the U.S. Otherwise, the Fed will continue to tighten policy — and the economic recovery will continue to sputter.

The Fed began tightening policy in 2014 when, despite a slow start, the U.S. economy made significant advances with some observers believing an economic boom was under way. This improved economic outlook and the need for Janet Yellen’s Fed to prove its inflation-fighting credibility led U.S. monetary officials to start talking up future interest rate hikes...

By talking about future interest rate hike, the Fed was indicating that tighter monetary conditions would exist in the future. That, in turn, worsened the economic outlook and caused companies to cut back on their spending plans. The Fed’s talking up of interest rate hikes, therefore, amounted to an effective tightening of monetary policy long before the actual raising of interest rates in December 2015. It affected not only the U.S. economy but also the many emerging economies whose currencies are pegged to the dollar, colloquially known as the “dollar bloc countries.”

This should be a familiar argument to readers of this blog. The only thing I would add to the Politico piece is that the Fed's slowing down of global aggregate demand since mid-2014 is a non-trivial reason why oil prices have declined so sharply since then. Along these lines, here is the OECD's leading indicator index for China and the United States: 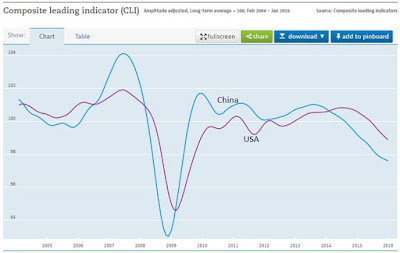 The second piece is an a podcast interview I did with Cardiff Garcia on FT Alphachat. We discuss NGDP level targeting and my call for an automatic treasury backstop to the target. Another way of thinking about this proposal is that an automatic treasury backstop to a NGDPLT is simply an automatic stabilizer tied to a target. It is way of doing 'helicopter drops' in a rule-based manner that actually works. What many people miss is that doing an ad-hoc helicopter drops in inflation-targeting regime will not do much good. It has to be tied to a level target to matter. (See Paul Krugman on this point too). Finally, this proposal adds credibility to the NGDPLT in a manner that Chuck Norris and Jean-Claude Van Damme would appreciate.

Update: the Fed held steady today and signaled there would be fewer rate hikes this year. This was a slight move to easing and good news for China.  Interestingly, the Fed listed "global economic and financial developments" as one reason for its response today. Here is Yellen in her press conference:


"Chinese growth hasn't proven a great surprise.  We have anticipated that it would slow over time, and it seems to be slowing as well.  Japanese growth in the fourth quarter was negative.  That was something of a surprise.  And with respect to the Euro area, recent indicators suggest perhaps slightly weaker growth.  So there's been a number of emerging markets, as you know, where suffering under the weight of declines in oil prices that are affecting their economic activity.  Our neighbors both to the north and south, Canada and Mexico, are feeling the impacts of lower oil prices on their growth.”

Notably absent from her response is the role the strong dollar is playing in these developments. The Fed is almost connecting the dots.

Posted by David Beckworth at 10:45 AM