Should We Worry About A Global Economic Slowdown?

The International Monetary Fund is sounding louder and louder alarms about the state of the global economy. The problem is, few major economies seem to be hearing them.

“The IMF’s latest reading of the global economy shows once again a weakening baseline,” the fund’s No. 2 official, David Lipton, warned Tuesday in a speech to the National Association for Business Economics.

While the world economy is still expanding, he said, “we are clearly at a delicate juncture, where risk of economic derailment has grown.”

On the other hand, the Peterson Institute for International Economics (PIIE) says no (my bold):

After five years of disappointing recovery throughout the major economies, almost everyone is ready to believe the worst. Global markets have displayed the fruits of that pessimism in recent months...

[W]e share a conviction that public discussion of the global economic out-look has run off the rails of late... Global economic fundamentals today are not so grim... and policymakers and the public should base their decisions on fundamentals, not market swings

So the IMF sees declining global aggregate demand growth and worries policy makers in advanced economies are not paying close enough attention to it. PIIE tells us the fundamentals are not so bad and to be more upbeat. Who is right?

Well, there is this OECD composite leading indicator which suggest a slowdown is ahead for the two largest economies in the world: 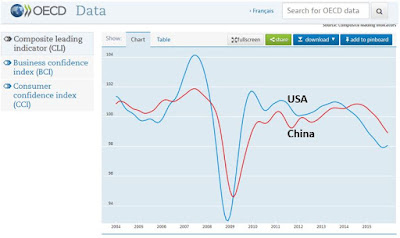 I chose to highlight China and the United States in this graph not just because of their size, but also because they share something in common: the monetary policy of the Fed. It is this common link that explains why both economies have seen increased economic problems within the last year and a half. It may also explain why the OECD leading indicator is turning down for both economies. For Fed policy has been tightening during this time. Here is how.

First, the Fed effectively began tightening monetary policy in mid-2014 by talking up interest rate hikes. That is, monetary policy began tightening well before the actual rate hike of  December 2015. This rate hike talk got priced into the market and (in conjunction with the easing bias at the ECB and BOJ) caused the dollar to soar at one of its fastest paces ever. Between mid-2014 and late-2015 the dollar rose over 20%. This can be seen in the figure below: 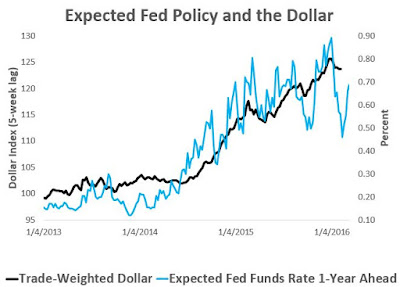 Second, this tightening of monetary conditions put the squeeze on the US economy.  A number of indicators--expected inflation, SP500, industrial production, risk premium on corporate debt--began slowing down just as the expected rate hikes began taking off as shown here. More generally, this tightening caused the growth rates of total dollar spending growth and employment growth to slow down. Gavyn Davies correctly called this development the "dollar shock" and warned that a 20% rise in the value of the dollar is enough to hurt even an relatively closed economy like the United States.

For all practical purposes, Hong Kong delegated the determination of its monetary policy to the Federal Reserve through its unilateral decision in 1983 to peg the Hong Kong dollar to the U.S. dollar... As in Hong Kong, Chinese officials are concerned about unwanted stimulus from excessively expansionary policies of the Fed and in other developed economies. Like Hong Kong, China pegs its currency to the U.S. dollar, but the peg is far less rigid. 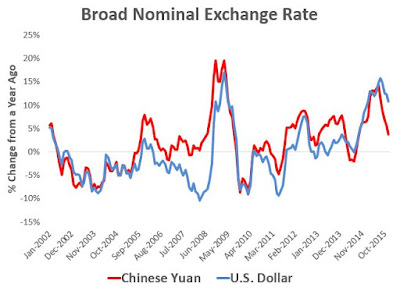 This was bad timing for China which already was experiencing slower growth from its transition to a more developed economy. Moreover, it acquired a lot of debt since 2008 making it more susceptible to economic shocks like a surging dollar. This monetary tightening from the Fed was offset by the Chinese monetary officials easing inside China through interest rate cuts and lower required reserves on bank lending. Between this internal easing and the existing slowdown in China, the Yuan should be falling in value. Instead, it is being propped up by the dollar. This imbalance cannot last forever and investors are racing to get out before the inevitable devaluation occurs. (No, capital controls are not a viable solution to this problem given the size of China's economy and the country's susceptibility to corruption. As an example, Chinese are now using trade invoices to get more capital out of the country.)


The timing of the capital outflows closely matches the Fed rate hike talk and the rise of the dollar so there should be no mystery here as to what is happening. The Fed's tightening that started in 2014 was the catalyst that sparked the capital outflows. All the other developments are of secondary importance.

More importantly, the Fed's tightening is what has tightened the noose around the Chinese economy and put the US economy close to a stall speed. This is the reason for the slowdown in global aggregate demand growth that is now worrying the IMF.1

While the Fed tightening has not yet pushed the global economy into a recession, imagine what could happen if the Fed goes ahead and raises interest rates several more times this year. Given the easing bias of the BOJ and ECB, it would mean a further appreciation of the dollar that would wreak more harm on the economies of China and the United States. This is the scenario that has the IMF concerned.  So while the PIIE is right to say the fundamentals are okay now, the IMF is also right to be worried they could quickly change.  Let's hope the Fed is paying attention.

1Note that this slowdown can explain between 40-50% of the decline in oil prices since mid-2014. This undermines the Fed's arguments for tightening since they are premised on the view that the low inflation is only transitory because it is being driven by positive oil supply shocks.A more careful view, then, would be only some of the inflation decline is due to supply shocks. Therefore, the low inflation should be more of a concern to the Fed.
Posted by David Beckworth at 3:52 PM