Here are some assorted macro musings from the past week:


1.  Been there, done that, and it did not end well China edition. Once again, China forgets there is a macroeconomic trilemma. From the Wall Street Journal:

China’s central bank is effectively anchoring the yuan to the dollar, a policy twist that has helped stabilize the currency in a year of political transition and market jitters about China’s economic management....

The newfound tranquility may not last: The focus seen in recent weeks on stability against the dollar, whether it goes up or down, means pressure on the yuan to weaken could get dangerously bottled up, potentially bring bouts of sharp devaluation. 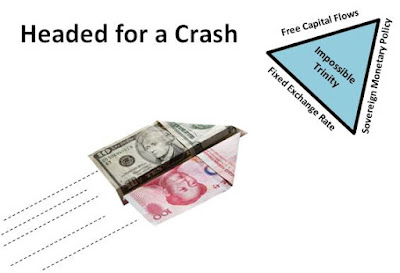 2. St. Louis Fed President James Bullard notices the U.S. economy is falling off of its trend price level path in a recent speech. 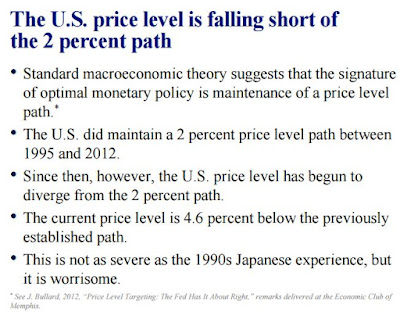 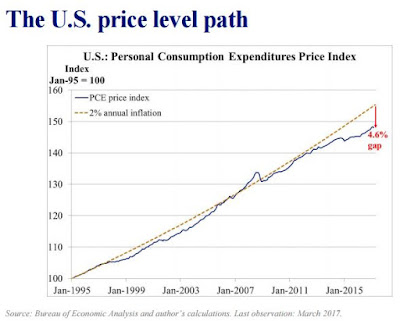 In short, the Fed’s normalization plan calls for it to prop-up banks’ demand for cash, as a prelude to reducing the supply of cash! That means tightening and more tightening. The rub, of course, is that conditions may never justify so much tightening. What's more, no plan for Fed normalization can work that would prevent the Fed from meeting its overarching inflation and employment targets.

4. Peter Ireland on what we can learn from the FOMC debates as seen in the latest minutes. Among other things, Peter notes the following:

Digging into the details of the FOMC’s debate reminds us, as well, of important lessons from economy history. Participants who warn that low unemployment today raises the risk of higher inflation in the future are organizing their thoughts around the idea of the Phillips curve, which describes an inverse relation between those two variables. One lesson from history, however, is that while data do often support the existence of a statistical Phillips curve, its fit is not nearly strong enough to serve as a fully reliable guide for monetary policymaking. The limitations of the Phillips curve approach became clear, for example, during the 1970s, when chronically high unemployment was accompanied by rising, not falling, inflation. Today, we may be seeing something similar: unemployment is below 4.5 percent, yet inflation continues to run below the Fed’s long-run target.

In fact, as other participants in the debate point out, inflation has been below target for the past eight years. If one accepts Milton Friedman’s famous dictum, summarizing historical experience that “inflation is always and everywhere a monetary phenomenon,” it is difficult to escape the conclusion that, despite an extended period of very low interest rates, Federal Reserve policy over this period has been insufficiently, not overly, accommodative. This echoes another lesson from the past. Milton Friedman, Anna Schwartz, Allan Meltzer, and Karl Brunner all concluded, likewise, that very low interest rates during the 1930s accompanied, and indeed were the product of, monetary policy that was consistently too restrictive.

Posted by David Beckworth at 6:34 PM