So a quick update on that grand monetary experiment in Japan known as Abenomics.

Prime Minister Shinzo Abe and his party were returned to power in a decisive October election. This means the Bank of Japan will continue to expand the monetary base, peg the 10-year government bond at 0%, and strive for 2% inflation.

I was an early fan of Abenomics, but have become a bit more skeptical over time. Others, like Noah Smith, are convinced it is working and are glad to see it continue. Mike Bird of the Wall Street Journal is also a fan. They make a reasonable argument that the real side of the economy has benefited from the Bank of Japan's policies.

So how is the nominal side of the economy doing? Okay, but not great. Inflation is above zero but nowhere near its 2% target. This is true even if we look at core measures of inflation that account for the 2014 changes in the consumption tax. Below is a chart from the Bank of Japan:

Nominal GDP (NGDP) in Japan--a measure of total nominal demand--does show more progress under Abenomics than with the original QE of 2001-2006: 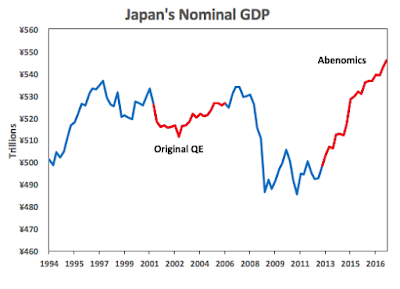 This progress of NGDP is an improvement, but if we step back and look at it from a broader historical perspective it is actually underwhelming. All Abenomics has done is return NGDP to a flat trend growth path. Nominal demand growth in Japan is still far below what it was before the 1990s. This has big implication for Japan's debt burden and suggests its real growth could be higher. 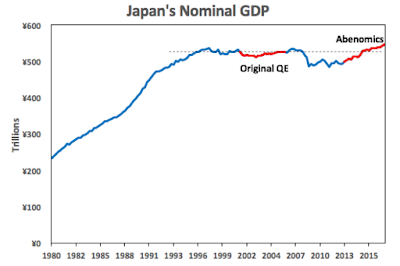 So why is Abenomics failing to pack a big punch? There is both an economic and a political answer. The former is a technical one that can be summarized in the chart below. It shows the actual monetary base and its permanent portion. (The permanent portion is proxied by currency and coins in circulation since they tend to drive the long-run path of the monetary base.) 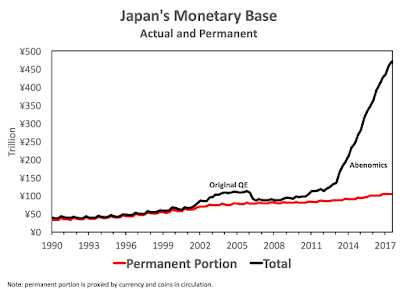 The expected path of the permanent part of the monetary base and by implication the expected path of the price level is what drives current inflation. If the expansion of the monetary base under Abenomics is expected to be unwound in the future then it should have little effect on the price level today. The permanent portion of the base suggests it will be unwound. (I have a forthcoming paper that explains in more detail why this permanent-temporary distinction matters so much.)

Another way of saying this is that market participants expect the Bank of Japan to do what it did after the initial QE program--reverse it. Michael Woodford, in his 2012 Jackson Hole speech, commented on the 2001-2006 episode:

The Japanese monetary base resumed a path that was close to a continuation of its trend prior to the QE period; hence, market participants who had continued to hold expectations about the long-run Japanese monetary base that were unchanged as a result of the QE policy would not have been that far off in their prediction (p. 241).

Woodford also notes that this experience comes “fairly close to providing an illustration of the kind of policy to which the irrelevance results of Krugman (1998) and Eggertson and Woodford (2003) should apply". This is the economic answer and the reason I have become more skeptical of Abenomics.

The political answer, in my view, is that the Bank of Japan will not make its monetary expansions permanent and significantly increase the inflation rate is because politically it cannot do so. Japan has an aging population that holds a lot of government debt and lives off of fixed income. Raising the inflation rate would harm them and create a political firestorm. I believe this is what ultimately is keeping Japan from getting robust nominal demand growth.
Posted by David Beckworth at 12:22 PM