Imagine you fall into a freezing lake and get hypothermia. You are rushed to the ER and receive good service initially, but your body temperature continues to remain below 98.6 Fahrenheit. The doctor says he is not sure why you are so cold. It is a puzzle to him and everything he thought he knew about body temperatures seems to be wrong. He says not to worry, though, as he turns on the air-conditioner. All should be well soon, he thinks, once the room starts to cool down.

The doctor leaves your room and comes back to check on you after 15 minutes. He finds that your body temperature has dropped even more and that you are shivering. He concludes the room was not cool enough so he dials up the air conditioner even more to really get the cold air blowing.

The doctor leaves and returns after another 15 minutes have passed. You are now unconscious, turning blue, and barely clinging to life. The doctor is now even more baffled about body temperature. Oh well, he concludes, there must be some transitory one-off factors affecting your body temperature. Not much the doctor can do about them as he heads out the room and dials up the AC a bit more. Eventually you die.

This story is an analogy of how the Fed has been handling inflation over the past decade. Just like falling into a freezing lake is a shock to your body temperature, that Great Recession was a shock to the inflation rate. And just like you being stabilized in the ER, the economy was initially stabilized by the Fed. After being stabilized, though, your body temperature never fully recovered just like the inflation rate never returned on a consistent basis to 2%. And just like the doctor seems to have forgotten the basics of body temperature, the Fed seems to have forgotten the basics of inflation. Moreover, the doctor is adding to his own confusion by turning up the air conditioner to cooler temperatures just like the Fed is increasingly perplexed as to why inflation remains low as it pushes up interest rates.

If the hypothermia story seems absurd to you then the recent Fed behavior toward inflation should also be absurd to you. FOMC members are increasing puzzled by the stubbornly low inflation rate and yet continue to talk up rate hikes on the top of ones they have already done.

Caroline Baum has a piece at MarketWatch on this tension. First, she notes the FOMC's inflation confusion:

[T]he most significant take away — the new news, if you will — was Yellen’s response to an audience question on why inflation remained so low at a time when the unemployment rate was hovering just above 4%.

After running through a “whole range of idiosyncratic kind of factors, most of which may be temporary/transitory things that affect inflation,” Yellen admitted she was “no longer certain” about inflation’s eventual rise. “My colleagues and I are not certain that it is transitory,” she said, referring to the chronic undershoot of the 2% inflation target.

Not transitory? Will this turn out to be another “conundrum” for the Fed? At her Sept. 20 press conference, Yellen elevated the chronic inflation undershoot to a “mystery,” a term Powell invoked at his confirmation hearing

She then explains what the Fed is doing in response to this inflation mystery:

So what’s the Fed’s approach to dealing with the chronic inflation undershoot? Why, raise interest rates and pare the balance sheet.

If this seems counterintuitive, it is. I have written that the Fed should either put up — run a more expansionary monetary policy to boost inflation — or shut up. Policy makers can’t continue to fret over low, stable inflation, on the one hand, and, on the other, implement policies that, all things equal, will slow economic growth and depress inflation further.

[Fed] officials remain perplexed by the past year’s surprising weakness in inflation. And yet there is something truly strange about that. How can the Fed continue to expect rate increases when it has no idea what’s going on with inflation? How can you know the economy will behave in a way that justifies rate increases while simultaneously admitting you don’t know how the economy is behaving?

The central bank appears to have put itself in an epistemological jam.

I like the epistemological jam framing a lot. The Fed is speaking out of both sides of it mouth. The Fed claims it does not understand the persistently low inflation and yet Fed officials make statements like this to justify the rate hikes: 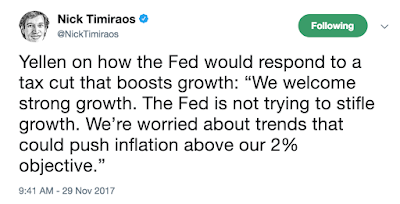 Call me crazy, but if the Fed feels it needs to raise interest rates because it is "worried about trends that could push inflation above [its] 2% objective" then maybe, just maybe its past rate hikes and signaling of future rate hikes might explain the low inflation over the past decade. Who knows, maybe monetary policy matters for long-run inflation trends after all. Or as Aaron Klein says:

Posted by David Beckworth at 1:06 PM