How Well Known Was the Productivty Surge of the Early 2000s?

In my previous post I noted that the rebound in productivity growth that started in the 1990s did not end with the tech bubble bursting in 2000. Rather, it took a temporary respite and then continued to accelerate for a few more years. The point of my sharing this information is that the robust productivity gains of the early-to-mid 2000s imply interest rates should have been higher. Instead they were dropping, a sign that monetary policy was too loose. This development also sheds light on the origins of the deflation scare of 2003: inflation was falling because of positive aggregate supply shocks (i.e. the rapid productivity gains) not negative aggregate demand shocks as was believed back then. Nominal spending, in fact, was soaring during this period. Consequently, the U.S. economy was getting juiced-up on easy money at same time it was being buffeted with positive productivity shocks. This policy response primed the U.S. economy for the emergence of economic imbalances.

A few commentators objected to this interpretation of events. They conceded that the actual productivity growth rate may have continued to surge, but questioned whether productivity expectations kept up with reality. Instead, they surmised that expectations of productivity growth declined after the tech bubble burst. If so, the expected marginal product of capital would have declined, investment demand would have decreased, and the neutral rate of interest also would have fallen. This is a great objection and one I had to check out. First, I went to the Survey of Economic Forecasters from the Philadelphia Fed and looked at the forecast of the average productivity growth rate over the next 10 years. This series begins in 1992 and is graphed below (click on figure to enlarge): 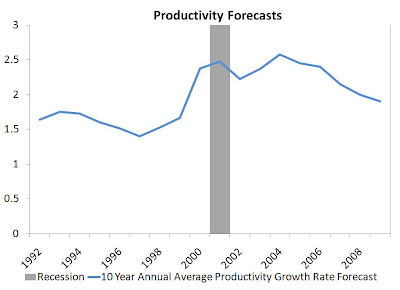 This figure show that the 10-year productivity forecast decline slightly in 2002 but resumed its climb in 2003. It peaks out in 2004, with mild declines in 2005 and 2006. By 2007 the writing was on the wall and the forecast begins to rapidly decline. This figure suggest, then, the actual productivity gains during this time were known and shaping the long-term forecast of productivity growth.
As a robustness check--and because I vaguely remembered there being a lot productivity stories in the media back in 2003-2004--I went to Lexus-Nexus and did a U.S. newspaper and news wire search with the following key words: productivity growth, accelerated or increased or pick up or faster or miracle or upward or improved or strong or robust or sustained. This search was intended to pick up articles, if any, discussing the productivity surge at the time. Here is what I found over 1992-2009 (click on figure to enlarge): 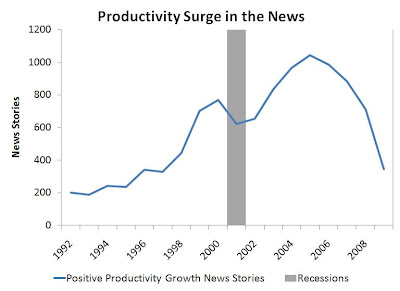 The above figures may not convince everyone, but they are enough evidence for me to conclude that my earlier interpretation of events during the early-to-mid 2000s cannot be too far off the mark.
Posted by David Beckworth at 8:32 PM

Email ThisBlogThis!Share to TwitterShare to FacebookShare to Pinterest
Labels: Miscellaneous, Past Monetary Profligacy