Much Ado About Nothing: the Dollar's Decline

There has been much angst by observers over the dollar's decline from the conspiracy laden to the serious and somber. Other observers say this discussion is pointless; the weakened U.S. economy needs some dollar depreciation so get over it. A quick look at the dollar's value in the figure below shows the dollar's decline is (1) only returning it to where it was 2007 and (2) pales in comparison to its slide between 2002-2007. (Click on figure to enlarge.) 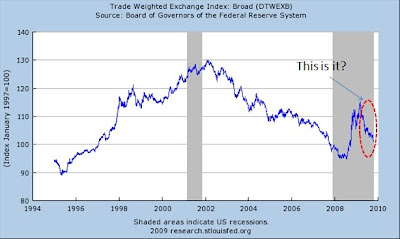 OK, let's be as plain as possible about this - as a , the dollar is not going anywhere. Really.

The dollar's slide in value has been predictable, as the need for a financial safe haven has abated. By and large, a depreciating dollar helps the U.S. trade balance (though it would help much more if the Chinese renminbi got in on the appreciation).

Because all of the alternatives have serious problems. The euro, the only truly viable substitute for the dollar, is not located in the region responsible for the largest surge of growth. It would be unlikely for the ASEAN +3 countries to agree to switch from the dollar to a new currency over which regional actors have no influence (the wouldn't be thrilled either, as it would lead to an even greater appreciation of the currency). Oh, and the has no consolidated sovereign debt market. The euro is worth watching, but it's not going to replace the dollar anytime soon.

The other alternatives are even less attractive. Most other national currencies beyond the euro - the yen, pound, Swiss franc, - are based in markets too small to sustain the inflows that would come from reserve currency status. The renminbi remains inconvertible. A return to the gold standard in would be infeasible - the liquidity constraints and vagaries of supply would be too powerful. There's the using-the-Special-Drawing-Right-as-a-template-for-a-super-sovereign currency idea, but this is an implausible solution. As it currently stands, the SDR is not a currency so much as a . Even after the recent IMF authorizations, there are less than $400 billion SDR-denominated assets in the world, which is far too small for a proper reserve currency.

So, what's really going on here with the dollar obsession? I suspect that with the Dow Jones going back over 10,000, Republicans are looking for some other Very Simple Metric that shows Stinks. The dollar looks like it's going to be declining for a while, so why not that? Never mind that the dollar was even weaker during the era -- they want people to focus on the here and now.

The thing is, I'm not sure this gambit is going to work. People who already think Obama is a socialist will go for it, sure, but that's only rallying the base. I'm not sure how much fence-sitters care about a strong dollar, however. If anything, populist movements tend to favor a debasing of the currency rather than a strengthening of it.

Update: Martin Wolf has a great column on this issue titled "the rumours of the dollar's death are much exagerated."
Posted by David Beckworth at 11:11 AM