What Was the Stance of Monetary Policy Late Last Year?

How does one best measure the stance of monetary policy? There are many ways to answer this question and, as a result, there are often many differing views on the stance of monetary policy. This issue came up at Cato Unbound's discussion on monetary lessons from the crisis when Scott Sumner argued that the reason the economy tanked in late 2008 and early 2009 was because tight monetary policy caused nominal spending to crash. Jeffrey Rogers Hummel disagreed; he contended that it was not tight monetary policy per se, but a collapse of velocity (i.e. increase in real money demand) that caused the fall in nominal spending. Here is Scott's reply:

[E]conomists are all over the map as to what the terms “easy money” and “tight money” really mean. In that case I am inclined to throw up my hands and ask this pragmatic question:

In a fiat money world where the central bank has almost limitless ability to pump money into the economy, and impact the expected growth of nominal aggregates, what is the most useful definition of the stance of monetary policy?

What I think Sumner is saying is that no matter what the source of volatility in nominal spending, its the Fed's job to counteract and stabilize it. In late 2008 the Fed should have been more aggressive in responding to the fall in velocity. By not doing so, Sumner is arguing monetary policy effectively was tight. I agree and have some evidence to support this view. 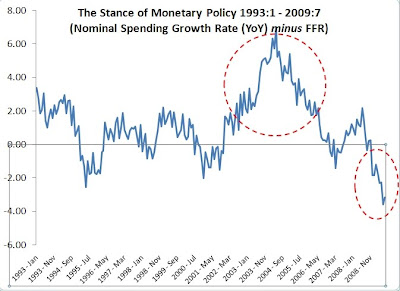 Note that I have highlighted two periods in red where there was a marked spread between the nominal spending growth rate and the federal funds rate. They just so happen to be the housing boom period and the mini-great contraction period Scott Sumner has been discussing. In the former case monetary policy was too loose while in the later is was too tight.

Unfortunately the monthly GDP data only go back to 1992. However, I created the same series on a quarterly basis back to 1961. This time I used final sales to domestic purchasers as my measure of nominal spending. I took this series and plotted it against the output gap series lagged 5 quarters.* 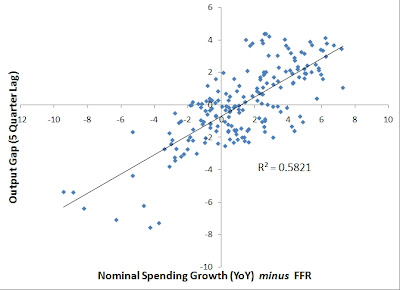 There is surprisingly strong relationship here: almost 60% of the variation in the output gap 6 quarters ahead can be explained by current variation in this monetary stance measure. Monetary policy does matter--take note Arnold Kling--and its stance can be easily determined by this metric.

*I used the output gap measure from John Williams et al. of the San Francisco Fed. See here for why it appears to be a better measure than the CBO's output gap.
Posted by David Beckworth at 9:12 AM