The Correct Money Supply Measure for This Crisis

Mark Thoma points us to Gary Gorton's testimony for the Financial Crisis Inquiry Commission where, among other things, Gorton notes that an accurate measure of the money supply should include repurchase agreements because (1) they too are bank liabilities used as money and (2) they have grown increasingly important:

[T]he bank liabilities that we will focus on are actually very old, but have not been quantitatively important historically. The liabilities of interest are sale and repurchase agreements, called the “repo” market. Before the crisis trillions of dollars were traded in the repo market. The market was a very liquid market like another very liquid market, the one where goods are exchanged for checks (demand deposits). Repo and checks are both forms of money...

Repo is money. It was counted in M3 by the Federal Reserve System, until M3 was discontinued in 2006. But, like other privately‐created bank money, it is vulnerable to a shock, which may cause depositors to rationally withdraw en masse, an event which the banking system – in this case the shadow banking system—cannot withstand alone...

This is a great point that started me wondering how M3 has behaved compared to M2 or M1 during this crisis. Based on Gorton's discussion it would seem that M3 would better reveal the impact of the crisis. As he notes, however, the Fed quit keeping track of M3 in 2006. Fortunately for us, though, John Williams at Shadow Government Statistics has been keeping track of M3 and this is what his data show (click on figure to enlarge): 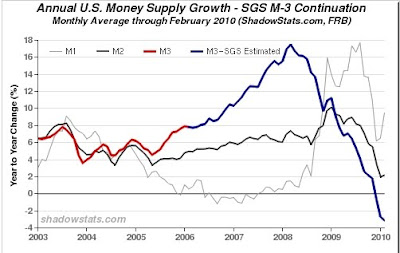 What a striking difference between the measures of money. The M3 growth rate has been declining since early 2008 and now is even negative. The other money supply measures still show positive growth. I suspect the Fed is now wishing it had not given this justification for ceasing its publication of M3:

M3 does not appear to convey any additional information about economic activity that is not already embodied in M2 and has not played a role in the monetary policy process for many years. Consequently, the Board judged that the costs of collecting the underlying data and publishing M3 outweigh the benefits.

By the way, since when did the Fed become so cost conscious?
Posted by David Beckworth at 8:40 AM