Bruce Bartlett has an interesting article that traces the history of the U.S. public debt that is foreign held. Here is an excerpt:

Until the 1970s foreigners owned less than 5% of the national debt. This began to change after the big run-up in oil prices. As oil exporters suddenly acquired vast financial resources they found it convenient to park them in Treasury securities, which provided liquidity and safety. By 1975 the foreign share of the national debt rose to 17%, where it stayed through the 1990s, when China began buying large amounts of Treasury bills. At the end of last year foreigners owned close to half of the publicly held national debt.

Here is the table from his column: 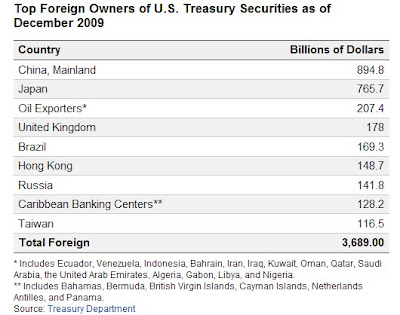 Posted by David Beckworth at 7:35 AM