Over at Alphaville, Isabella Kaminska is fretting over what seems to be a breakdown in the equation of exchange:

So what’s wrong with Irving Fisher’s famous MV = PT equation? Why has throwing money at the problem not affected the relationship between money and income in the equation the way it supposedly should?

Drawing on a research note by Standard Chartered, Isabella concludes the answer must be with velocity. Let me reassure Isabella that the equation of exchange still holds and that there is more to story than just velocity. As I showed in an earlier post, the way to see this is to first note that M, the money supply, is the product of the monetary base, B, times the money multiplier, m:
M = Bm.
Now substitute this into the equation of exchange to get the following (I use PY instead of PT ):

BmV = PY
Now we have an identity that says the sources of nominal spending, PY, are the monetary base, the money multiplier, and velocity. Here, V = velocity or the average number of times a unit of money is spent, P = price level, Y = real GDP, and thus, PY = nominal GDP. This accounting identity allows us to think about what causes may have been behind the the dramatic decline in nominal spending, PY. Using MZM as the measure of M and monthly nominal GDP from Macroeconomic Advisers to construct velocity (i.e. V=PY/M), the three series on the left hand side of the expanded equation of exchange are graphed below in levels (click on figure to enlarge): 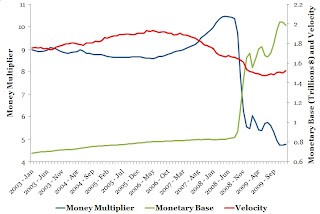 The last time we saw this figure was in September 2009. I noted then that the surge in the monetary base was largely offset by decline in the money multiplier leaving velocity as the main factor pulling down nominal GDP. This doesn't seem to have changed much, though velocity looks like it has bottomed out. I also noted then that the decline in the money multiplier probably reflects (i) the problems in the banking system that have led to a decline in financial intermediation as well as (ii) the interest the Fed is paying on excess bank reserves. The decline in the velocity is presumably the result of an increase in real money demand created by the uncertainty surrounding the recession. For the sake of completeness, the below figure graphs the the right-hand side of equation (2): 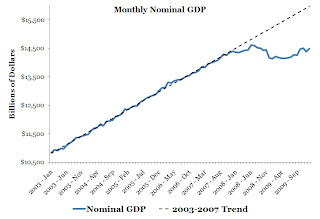