Why Isn't the Fed Doing More?

Houston, we have a a problem. It appears that that total spending in the U.S. economy is slowing, if not outright contracting. Retail sales fell in May while in April personal consumption expenditures stalled. In addition, housing starts and homes sales plummeted in May. Meanwhile, the MZM measure of the money supply has been declining since late 2009. Since these developments indicate that both money (M) and velocity (V) are declining, it is safe to conclude that aggregate demand (PY) is falling too (i.e. MV = PY). Given these developments why isn't the Fed doing more to help the U.S. economy? Surely, it can stabilize MV. Here is what three observers had to say in response to this question:

1. David Leonhardt. Financial markets are fragile and the Fed does not want to upset the market's confidence in the U.S. government by further easing of monetary policy. More monetary stimulus might just be the trigger to spook markets into dumping the dollar and U.S. debt.

2. Daniel Gross: The Fed is exhausted from its grand experiments in central banking--it has already drop interest rates to 0%, created new lender-of-last-resort facilities, and blew up its balance sheet--and is puttering out from sheer exhaustion.

3. Ryan Avent: There is division within the Fed on whether further monetary stimulus is really necessary. Moreover, even if there were no internal divisions, the Fed leadership may still be reluctant to act because it fears doing so may cause long-run inflation expectations to become unanchored.

There may be some truth in these responses, but let me add two more potential reasons for the Fed's inaction. First, the Fed may believe that some of the problems in the economy may be real in nature rather nominal and if so there is little monetary policy could do to improve matters. For example, if the Fed believes the high level of unemployment is mostly of the structural kind rather than cyclical then there is only a downside to further easing. This probably isn't a big factor--see the Atlanta Fed and the Ryan Avent on this issue--in the Fed officials' thinking but on the margin it may give them another reason to be reluctant to ease.

A second reason may be the Fed is looking at the wrong indicators in determining the stance of monetary policy and thus mistakenly thinks it is being highly accommodative when in fact it is not. In particular, the Fed may believe it is already doing enough by holding its target interest rate, the federal funds rate, close to 0%. That is the impression one gets when reading statements like this one from the FOMC press release for the June 23, 2010 meeting:

Observers, however, like Michael Belongia, Scott Sumner, and Nick Rowe have been arguing for some time that a low federal funds rate can be a misleading indicator of the stance of monetary policy. Even if one sticks with the federal funds rate as an indicator, then folks like Glenn Rudebush would point out that it would need to be about -3% (which it can't because it can't below zero) to be adding the right amount of stimulus. The bottom line is that the Fed may be inadvertently tightening by sitting on a 0% interest rate target and doing nothing.

This unintended tightening of monetary policy seems to be the message coming from the difference between the nominal interest rate on the 5-year Treasury and the real interest rate on the 5-year Treasury inflation protected security (TIPS). This difference or spread amounts to the markets expectation of future inflation. Below, this spread is graphed for the first half of this year up through June 24, 2010. 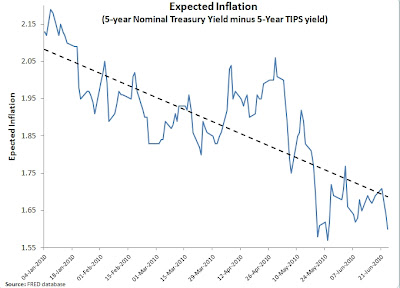 There is a clear downward trend in inflation expectations. Given the developments mentioned above and the other looming economic problems (Eurozone uncertainty, austerity talk, weak household balance sheets, etc.) the most obvious way to interpret this decline is that the markets expect aggregate demand to weaken going forward. Now it is possible that an increase in the liquidity premium is driving some of this decline, but I am not convinced it undermines my interpretation for several reasons. First, such a change in the liquidity premium would itself be driven by the recent uptick in perceived market risk, but that development has only happened in the last month or so as seen in the figure below. The decline in expected inflation has been going on for six months. 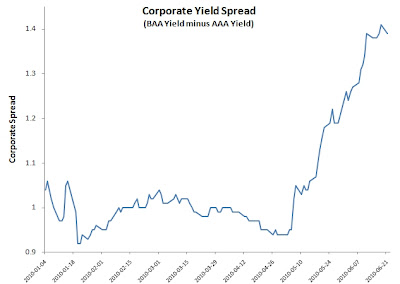 Second, even if spreads are driving the some of the more recent declines in expected inflation one must ask whether the spreads would be going up in the first place had the Fed been stabilizing inflation expectations (and thus aggregate demand) all along. Any way you slice the data it ain't a pretty picture.

So what do you think? Why isn't the Fed doing more?

Update I: Scott Sumner says Ben Bernanke is trying to do more, but is constrained by internal divisions at the Fed. Chalk one up for Ryan Avent.

Update II: The expected inflation chart was updated one day to June 24.
Posted by David Beckworth at 5:11 PM