Tyler Cowen made the case today that the Fed has not been expansionary enough:


The economy needs help, but monetary policy, which is the Fed’s responsibility, has not been very expansionary. This is true even though the Fed has increased the monetary base enormously since the onset of the financial crisis. How can this be? Supplying more money did not actually result in enough additional spending. The debilitating financial shock of the last few years convinced many consumers and businesses that they needed to save more. So they are holding on to much of the new money. Given this problem, there is a logical and seemingly simple move available to the Fed: just make people believe that it is seriously committed to increasing the rate of inflation...If the Fed promises to keep increasing the money supply until prices rise by, say, 3 percent a year, people should eventually start spending.... Sadly, although Mr. Bernanke clearly understands the problem, the Fed hasn’t been acting with much conviction.

I'll say, just look at the two figures below which show the expected CPI inflation rates at different forecast horizons.  The data comes from the Cleveland Fed and is based on a model that uses information from, among other places, the Treasury market  in a manner that controls for the liquidity premium. The first figure below shows  the "term structure" of expected inflation in September, 2010 and compares it to September, 2009, a year earlier.  The term structure or the plotted curves in the figure show the average expected inflation rate at different yearly horizons.  These figures show a striking drop in expected inflation over the past year.  The one-year inflation forecast went from 2.38% to 0.90% while the ten-year forecast moved from 2.03% to 1.54% (Click on figure to enlarge). 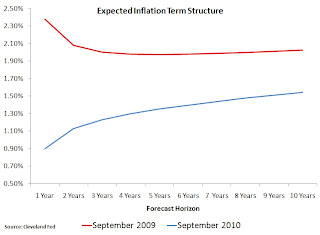 Lest you think I picked two arbitrary data points for comparison, the figure below shows the values for these horizons over the past year along with a fitted linear trend.  Here we see unmistakable downward trends for both series (Click on figure to enlarge). 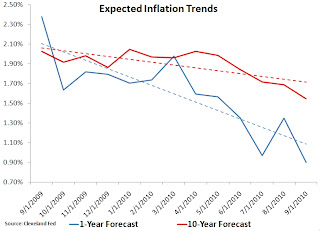 These figures underscore Tyler Cowen's point that the Fed has not been expansionary enough.  They show lower expected inflation across all horizons which implies the the market also expects weaker aggregate spending in the future.  Moreover, since the Fed has done nothing meaningful to arrest these downward trends these figures also indicate the Fed is effectively tightening monetary policy!   I have made this point many times before using the implied expected inflation rates coming from Treasury Inflation Protected Securities (TIPS).  The reason I keep coming back to this issue is because it is mind-boggling that Fed could be so passive at a time like this.  There are big-time balance sheets problems in the U.S. economy right now, particularly in the household sector, and the last thing we need are further declines in nominal economic expectations.  Yet, the Fed seems intent on letting such expectations steadily fall.  I just don't get it. And I bet that Milton Friedman wouldn't get it either if he were alive today. The Fed cannot solve all of our problems, but it can stabilize nominal expectations which would add a lot more certainty to our economic environment. Until it starts doing so all I can wonder is "Dude, where's my central bank?"
Posted by David Beckworth at 5:52 PM