Can the US economy really return to “business as usual” when it has 4 million houses surplus to requirement, when 1 out of 4 mortgages are in negative equity, and when by our calculation, it is burdened with $4 trillion of excess mortgage debt, equivalent to 30% of GDP?

The fact that mortgage debt has barely declined suggests that relatively few homeowners have defaulted on their mortgages or paid off debt yet. Instead, a quarter of all borrowers are sitting on negative equity. That’s just as well – because were mortgage debt to shrink by even half of $4 trillion, the US economy would slump.

Here is the accompanying figure: 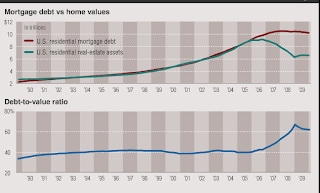 [Update: the greenish line in the top panel should be labeled "U.S. residential real-estate assets multiplied by 0.4." The 0.4 represents the how much mortgage debt has been as a percent of the U.S. housing stock historically.  Joshi considers it the sustainable level of mortgage debt given the collateral value of housing. I added the second paragraphs above to make this clearer.]
I was reminded of Joshi's article after reading this by Tyler Cowen:


It seems increasingly clear that we must [let house prices fall].  For how long can the government prop them up?  Are we never to have a private market in mortgages again?

Yet what happens if we let them fall?  Arguably many banks would once again be "under water."  Enthusiasm for another set of bailouts is weak, to say the least.  Our government would end up nationalizing these banks and it still would be on the hook for their debts.  The blow to confidence would be a major one, especially if along the way we saw a recreation of a Lehman or Bear Stearns or A.I.G. episode.

What a mess we are in.  So what can be done? My recommendation is (1) have the Fed take more aggressive actions to stabilize the macroeconomy which would make it easier to (2) do the structural changes needed to address the problems outlined above.  One specific structural proposal would be to swap underwater mortgage debt for equity. What suggestions do you have?
Posted by David Beckworth at 10:13 PM