Many times I have discussed here how the Eurozone is far from an optimal currency area--its member countries have different business cycles and insufficient economic shock absorbers in place--and the problems that this reality creates for the ECB in conducting monetary policy.  One of the key problems is that the ECB is applying a-one-size-fits-all monetary policy to vastly different economies.  For example, consider the case of Ireland and Germany.  When the Euro was adopted in 1999 Ireland was growing close to 10% while Germany was growing around 3%.  Should the ECB be responding to Ireland, Germany, or the average in setting its target interest  rates?  As the figure below shows, up through the end of the housing boom period Ireland was consistently growing faster than Germany. (Click on figure to enlarge.) 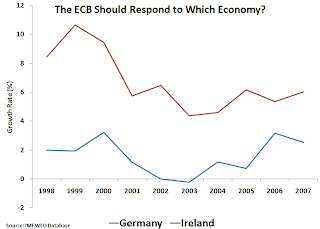 Via Ralph Atkins we learn of Barclays Capital report that looks closely at this issue. Unsurprisingly, it finds the following:


ECB interest rates have generally corresponded more to economic conditions in Germany - the eurozone’s biggest economy - than the eurozone as a whole.

This means ECB monetary policy was well-suited for the low-growth German economy, but way too easy for the hot Irish economy.  Easy monetary policy, therefore, must have been an important contributor to the housing boom in Ireland during this time. I think Josh Hendrickson would agree.
Posted by David Beckworth at 10:02 AM