Salvaging the Equation of Exchange

Jim Hamilton is not a big fan of this equation:
MV = PY,
This is the famous equation of exchange where M is the money supply, V is velocity, P is the price level, and Y is real GDP.  Back in 2009 he questioned Scott Sumner's use of it in thinking about the economic crisis.  I replied that though it was just an accounting identity, it still shed some light on the economic crisis in its expanded form.  Now he is questioning its use as a way to measure velocity.  He correctly notes that  velocity is nothing more than a residual from this accounting identity, whose value can change based on what measure of the money supply one uses (i.e. V =[PY]/M). He further questions its usefulness by noting in several figures that M1's growth rates seem to be almost perfectly offset by changes in velocity's growth rate.  Here is a figure that reproduces Hamilton's M1 graphs for the 1980-2010 period.  (Click on figure to enlarge.) 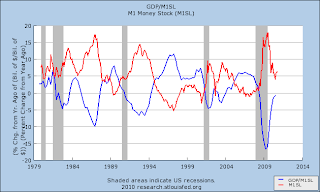 Yes, it is rather striking in this figure that the growth rate of M1 and M1 velocity tend to move in almost perfectly opposite directions.  But why should the growth rates of M1 and M1 velocity necessarily move in opposite directions?  Hamilton's critique, as I understand it, is that they should move inversely because velocity is simply a residual in the equation of exchange.  But this understanding hinges on the assumption that nominal GDP growth is relatively stable.  But nominal GDP growth has not always been stable.  It just so happens, however, that most of the time in Hamiltion's 1980-2010 figures cover the "Great Moderation", the period when the Fed did a relatively good job of stabilizing nominal spending.  One would therefore expect the changes in the money supply to largely offset changes in velocity during this time. The Fed was doing its job. The near symmetry in the figure is a testament to its success.
Now if one looks outside the 1980-2010 period this symmetry is harder to find. Here is the 1960-1979 period with the same series: (Click on figure to enlarge.) 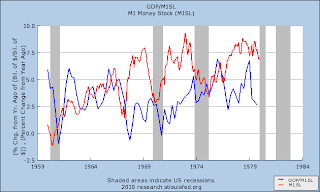 The lack of symmetry here is not particularly surprising.  The Fed's performance in stabilizing the growth of nominal spending was abysmal during this time, as shown by Josh Hendrickson.  Along these same lines, there are points in the 1980-2010 figure where the symmetry is missing. They all occur during recessions.  These are cases where the Fed failed to adequately stabilize NGDP.
I find these figures, motivated by the equation of exchange, insightful.  They show there is merit in using the equation of exchange.  Moreover, if one looks to the expanded equation of exchange form as done here there is much insight this identity can brig to bear on the economic crisis.