Bernanke responds today to the accusation that the commodity price boom is being caused by U.S. monetary policy:

Supply and demand abroad for commodities, not U.S. monetary policy, are causing higher food and energy prices rattling much of the world, Federal Reserve Chairman Ben Bernanke said Thursday.  “The most important development globally is that the world is growing more quickly, particularly in emerging markets,” Bernanke said in response to a question after his speech at the National Press Club...“I think it’s entirely unfair to attribute excess demand in emerging markets to U.S. monetary policy,” Bernanke said. Those nations can use their own monetary policy and adjust exchange rates to deal with their inflation problems, he said. “It’s really up to emerging markets to find appropriate tools to balance their own growth.”

Scott Sumner and Paul Krugman would agree with this assessment.  Here is an update figure from an earlier post that shows the year-on-year growth rates of industrial production in emerging economies and the CRB Commodity Spot Index: (Click on figure to enlarge.) 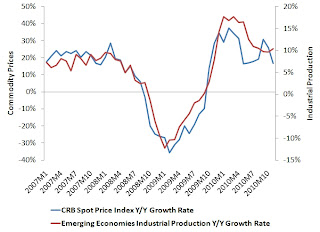