According to Jim Hamilton, the answers is  yes.  He shows that the average maturity of publicly-held U.S. debt continues to grow despite the Fed's QE2 program.  This should not be the case.  Under QE2, the Fed is purposefully trying to lower the average maturity of Treasury securities for reasons that will be explained later.  The fact that the Fed is not shortening the average maturity means that the Treasury is issuing long-term debt faster than the Fed is buying it up.  Nonetheless, there is still evidence that that QE2 is having an effect on nominal and real expectations as seen here.  Thus, the U.S. Treasury Department has not completely thwarted the Fed's efforts, but it is surprising to see fiscal policy and monetary policy working against each other here.
So why does the average maturity of Treasury securities matter?  The standard answer is that if the Fed reduces the average maturity then there will be a drop in the net supply of long-term Treasuries.  This will cause their prices to go up and their yields to drop.  The drop in yields, in turn, would affect interest sensitive spending.  This interest rate effect, however, is only part of a bigger, richer story that gets overlooked.  This bigger story is how the shortening of the average maturity will lead to a rebalancing of assets in investors' portfolios and, in so doing, affect nominal spending.  This  rebalancing story is the portfolio balancing channel of monetary policy.
The portfolio balancing story goes as follows.  Currently, short-term Treasury debt like T-bills are near-perfect substitutes for bank reserves because both earn close to zero percent and have similar liquidity.  In order for the Fed to get investors to spend some of their money holdings it must first cause a meaningful change in their portfolio of assets.  Swapping T-bills for bank reserves will not do it because they are practically the same now. In order to get traction, the Fed needs to swap assets that are not perfect substitutes.  In this case, the Fed has decided to buy less-liquid, higher-yielding, longer-term Treasury securities.  Doing so should lower the average maturity of publicly-held U.S. debt.  It should also overweight investor's portfolios with highly-liquid, lower-yielding assets and force investors to rebalance them.  In order to rebalance their portofolios, investors would start buying higher-yielding assets like stocks and capital.  This would ultimately drive up consumption spending--through the wealth effect--and investment spending.  The portfolio rebalancing, then, ultimately cause an increase in nominal spending.  Given the excess economic capacity, this rise in nominal spending should in turn raise real economic activity.
My description of the portfolio channel so far ignores the importance of expectations.  If the Fed could convince investors that it is committed to the objective of higher nominal spending and higher inflation (say through an  explicit  nominal GDP target) then much of the rebalancing could occur without the Fed actually buying the securities.  For if investors believe there will be a Fed-induced rise in nominal spending that will lead to higher real economic growth and thus higher real returns, they will on their own accord start  rebalancing their portfolios toward higher yielding assets. Likewise, if investors anticipate higher inflation, then the expected return to holding money assets declines and causes them to rebalance their portofolios toward higher yielding assets.  In other words, by properly shapping nominal expectations the Fed could get the market to do most of the heavy lifting itself. I believe this is why QE2 is still having some effect despite the Treasury working against it.
To put this portfolio rebalancing issue in perspective, it is useful to see how the combined portfolios of households and non-financial firms are weighted toward highly liquid assets.  Using the Flow of Fund data, the figure below shows for the combined balance sheets of households, non-profits, corporations, and non-corporate businesses the percent of total asset that are highly liquid ones (i.e. cash, checking accounts, saving and time deposits, and money market funds) as of 2010:Q3: (Click on figure to enlarge.) 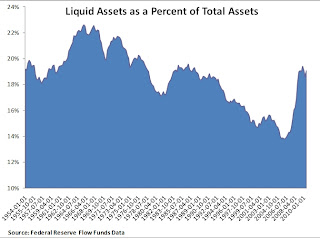 Source
The figure shows that the spike in demand for liquid assets that began in the 2008 financial  crisis remains elevated through 2010:Q3.  This is why there is still an aggregate demand (AD) problem.  The nonfinancial private sector is still reluctant to spend its money holdings--there appears to still be an excess money demand problem.  The Fed' s job, then, is start a rebalancing of portfolios that is vigorous enough to bring the holdings of  money assets more into line with historical trends.  Once this happens the aggregate demand shortfall should disappear.
P.S. It will be interesting to see what has happened to the above figure once 2010:Q4 data comes out.  Given the rise in inflation expectations and the improved economic outlook, we should see some meaningful adjustment to share of assets held as money.
Posted by David Beckworth at 10:05 AM